(The Speaker is Death)

There was a merchant in Baghdad who sent his servant to market to buy provisions and in a little while the servant came back, white and trembling and said, “Master, just now when I was in the marketplace I was jostled by a woman in the crowd and when I turned I saw it was Death that jostled me. She looked at me and made a threatening gesture. Lend me your horse and I will ride away from this city and avoid my fate. I will go to Samarra and there Death will not find me.” The merchant lent him his horse and the servant mounted it. He dug his spurs in its flanks and as fast as the horse could gallop he went.  Then the merchant went to the marketplace and he saw me standing in the crowd. He came to me and asked, “Why did you make a threatening gesture to my servant when you saw him this morning?”

“That was not a threatening gesture,” Death replied. “It was only a start of surprise. I was astonished to see him in Baghdad, for I had an appointment with him tonight in Samarra.”

These few lines have always intrigued me, not because of their irony but because they express our inability to outrun death or destiny or whatever we want to call it. A lady who shared my name will not be celebrating Christmas this year. Her daughters will not decorate a tree, bake cookies, or open presents with her on Saturday morning. The “other” Sharon Kennedy was taken without a moment’s notice. There was no time to say goodbye or give a final hug. No time to utter the words “I love you” so precious to the one who hears them. No time for anything. Unknown to Sharon, an appointment in her “Samarra” awaited as she walked home one rainy, dark evening. 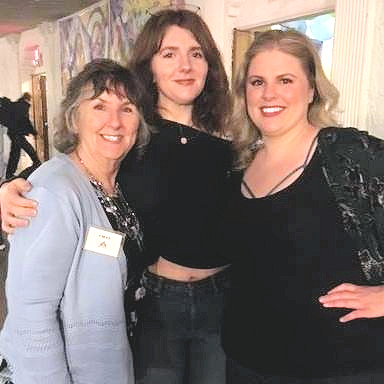 The other Sharon Kennedy, with daughters

Veteran’s Day was the last day of Sharon’s life. She was struck by a vehicle and died at the scene. As the Register of Deeds and Equalization Director, she was respected and well-known throughout Chippewa County. Everyone was shocked when the accident was reported. Condolences started pouring in. Messages relaying what a “good, kind, lovely” woman she was flooded Facebook and were repeated from one friend to another. It wasn’t just the unexpected death of a gracious lady. It was the way she left this world.

Sharon didn’t have to be at work that Thursday. It was a federal holiday, but she was going to retire soon and wanted to make sure everything was in order prior to her departure. She was meticulous in whatever she did and patient when helping people who had questions concerning their property. The last time I spoke with her was in May of this year. It was a business call and once that was out of the way, we made plans to meet for lunch. Unfortunately, the months slipped by and luncheon plans were forgotten.

Life is like that, isn’t it? We promise a friend or relative we’ll see them soon. We make plans to meet at a favorite restaurant or drive to their home for coffee and conversation. Sometimes we fulfill these plans, but more often than not, we don’t. Our intentions are good, but we can’t seem to find the time. It’s not an intentional omission. It’s just the way things are.

People who did not know there were two Sharon Kennedys in our area often confused one with the other. The first time Sharon ran for Register of Deeds, I was selling Avon products. My customers told me I would get their vote. When my columns began appearing in newspapers, people told Sharon how much they enjoyed reading them. She was my cousin through marriage and although divorced, she kept the Kennedy surname. We often laughed about the confusion our names caused. Once I received an invoice meant for her. Occasionally she received phone calls from an old beau of mine who wanted to rekindle our friendship.

A few weeks ago I was selling my book at a craft show. A gentleman looked at me and said I resembled the woman who wrote for the Sault News. He said it was too bad she had died. When I told him I hadn’t died, that it was the “other” SK who was gone, he didn’t quite believe me. He was sure I was mistaken. It’s an odd feeling when people think you’re the one who passed into the Great Unknown. He was not the only one who thought I was gone. I finally called local radio stations and asked them to tell the public it was the Register of Deeds, not the columnist, who had died.

And so my life continues and Sharon’s has ended. Like so many other families who lost a loved one during the year, Christmas will be a little less joyous, a little more somber. None of us knows how many days we are given. That’s a good thing, for if we knew the future how could we endure it? The memories of those who were taken will give us comfort this Christmas and many more to come. And when November 11, 2022 is nigh, we’ll remember Sharon Kennedy and the legacy of love to family and devotion to duty she left us.