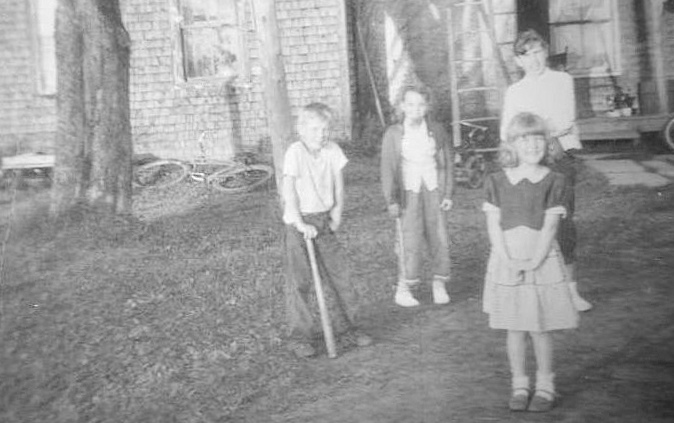 Our front yard and some of the players

When I was young, July was one of those lazy months in Michigan’s Upper Peninsula when nothing much happened on the sideroad except our nightly softball games. Once the 4th was over and our sparklers were only memories, we looked forward to those games. They were our source of entertainment after evening chores. We hurried through our routine which meant feeding and watering the pigs, milking the cows and putting them out to pasture, mucking the stalls, washing the milk utensils, shooing the chickens into their coop for the night, and helping wash the supper dishes. When everything was done, our time was our own and the neighbor kids gathered in our front yard. The game was on.

We didn’t have a lawn mower in those days, but we did have the cows. Maude and Daisy, our two Jerseys, trimmed the grass. During the afternoon we stood by and made sure they didn’t go on the road. Then we rounded them up and put them in the pasture. The “girls” kept the grass cut except in the ditches or the field to the south. If a ball landed there, the game was put on hold while we searched through the tall timothy, saplings, and weeds. When a girl was at-bat there was no problem because we never hit the ball very far, but it was different when a fellow was at home plate, especially Rex McCrary. If pitched just right, Rex could hit the ball to the south or across the road guaranteeing a home run.

The summer I was twelve was the summer of non-stop softball. Even when the mosquitoes were so thick we could hardly see each other, we didn’t quit until it was too dark to see the ball. We never knew how many players would show up. There might be as many as ten or as few as seven. The Strong boys, cousin Lulabelle, various McCrary brothers and occasionally their sister, and my siblings comprised two teams. Sometimes Mom or Dad joined us as pinch hitters. Sometimes one kid would be a player on both sides to even things out.

We were a motley group, a few having outstanding ability to pitch, catch, field, hit, or run, others displaying no ability beyond yelling. I don’t remember if there was a glove among us, but I know we had plenty of bats and at least one good softball. What comprised our bases is lost to memory. They could have been anything from chunks of wood to lunch bags stuffed with straw and stones and secured with pieces of binder twine. We were particular about only one thing. The runner had to touch the base and not move it too far from its original position or carry it home with him.

There was no such thing as a pre-game warm-up ritual unless you count Roger McCrary’s habit of climbing our maple tree and hanging from his knees. Like his brothers, he was an agile character, unacquainted with the fear of falling. Mom snapped a picture of him, one of her better ones because she managed to get his head in the picture as well as the tree. That photo is in an old album I gave to my brother.

If our cows hadn’t recently mowed the grass, the game was held down the road at McCrary’s, but their yard wasn’t as good as ours. There were too many obstacles to maneuver around and too many distractions, so the game never lasted as long as at our place. There was always something interesting to see and divert our attention like new kittens or a litter of pigs. Then there were the dogs to contend with. Our dogs stayed clear of the ball field, but the McCrary dogs wanted to play along with us. I remember one evening when a tragic accident happened. Country dogs delighted in chasing cars. Unfortunately, they didn’t always have good luck.

On that particular evening, Bingo met his doom. Our game was going well when out of nowhere a stranger’s car raced down our gravel road. Bingo left the yard and ran for the car. If I want to put a philosophical spin on it, I could say he died doing what he loved more than anything else in this world. I don’t remember if he managed to crawl to the ditch or if the boys dragged him there, but that’s where he breathed his last.

Naturally, the Strong boys were heartbroken. I don’t think they had much luck with dogs, and now Bingo had joined his predecessors in Doggy Heaven. I’m sure we consoled them, but the game couldn’t stop because of a dead dog. As farm kids, we were well acquainted with the death of animals. Something was always getting hit by a car, and it wasn’t unusual to find a cat or dog in the ditch when we went for our morning bike ride. It was sad, but it couldn’t be helped if the animal didn’t make it to safety fast enough. So after many tears and much blowing of noses and complaining from the boys that we were hard-hearted hicks, the game continued.

Like the big leagues, the only time our games were called was on account of rain. If a kid got hit from one of Rex’s line drives or a dog died, too bad, the game went on. If somebody got mad because he didn’t like the catcher’s call, he got over it or went home. Nobody acted as umpire so it fell to the catcher—if someone volunteered to do the job and take his life in his hands—to decide if the pitcher threw a strike or a ball and his word was law. I might add that the pitcher’s mound wasn’t stationary. If the kid chosen to pitch couldn’t throw very far or had a weak arm, he moved closer to the batter. That was the only thing we didn’t argue about.

From the trained eye, our games lacked even a hint of sophistication, but we didn’t care. It was the fun that was important, not strict adherence to baseball rules. And that’s what we called it—baseball. Even when we played with a wiffle ball, it was baseball. First up was decided by the hand that landed on the top of the bat. Order of batters was decided by who yelled the loudest. Number of outs might have reached four if one out was contested.

So there you have it. Farm kids on my sideroad knew how to make their own entertainment without the aid of electronic gismos or expensive four-wheelers. When the night’s game was over and the other kids went home, it was time to get out the Mason jars and catch lightning bugs. The tall grass in the south field was full of blinking fireflies, and we had no problem catching them. Before Mom called us in, my sister and I sat on the porch rockers and watched those bugs light the night, but we always released them prior to going into the house.

As July slipped into August, our games became more frequent. We knew it wouldn’t be long before summer was gone and another school year beckoned. Until then, we played with all the enthusiasm of a Detroit Tiger during the ninth inning of the seventh game of the World Series.

George Kell would have been proud. 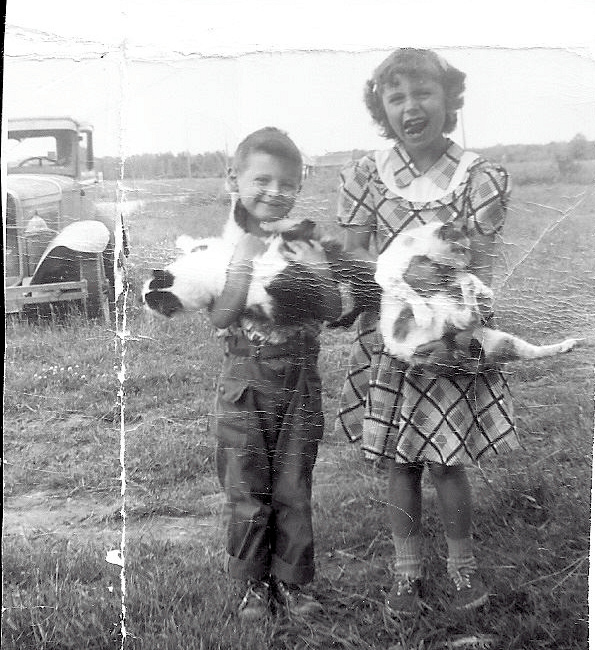 Clearing cats off the ball field