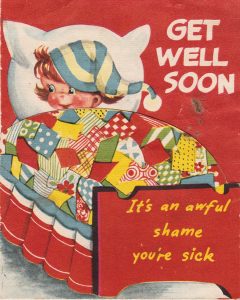 One morning a long time ago I was chatting on the telephone with my brother when the conversation unexpectedly turned to something he referred to as the “Thursday Night Bellyache” aka TNB for short. I asked if it was a new malady raging across the country. Was it something mentioned on the Dr. Oz show? Was there a pill for it? What were my chances of catching it? Was it fatal?

My brother laughed. The gist of what he said went like this. When a kid doesn’t want to go to school on Friday, he doesn’t wait until the morning to begin his act. He starts rehearsing Thursday evening. He holds his belly and tells Mother he isn’t feeling well. She puts her hand on his forehead which does seem a little warm. She fills a glass with tepid water, drops an Alka-Seltzer into it, and hands it to him.

At this point, Junior has two options. He can drink the awful tasting stuff or he can fess up. Naturally, the kid has no intention of telling the truth. He drinks the fizzy medicine, burps a few times, and waits. Meanwhile, Mother has moved on to more pressing issues like ironing his best shirt for the next day and putting new laces in his oxfords. She’s well acquainted with the routine because it happens every Thursday night. Junior doesn’t hate school. He hates his teacher because she picks on him.

By morning, Junior’s bellyache has morphed into a blazing BELLYACHE. He’s convinced himself he’s also suffering from a raging fever and no amount of reassurance by Mother can change his mind. His forehead does seem warmer than usual and his tears appear genuine. Mother is torn between sending a sick child to school or falling for his performance. She ponders which decision will cause her the least amount of trouble. She reasons he can make up the spelling test on Monday if he really is sick. And if he’s faking an illness, it’s still more prudent to err on the side of caution. Junior gets a hug from Mother and she returns to the kitchen.

The second she leaves his room he snuggles underneath the covers, congratulates himself on a well-done performance, and drifts off to dreamland. That, in a very long nutshell, is the definition of the Thursday Night Bellyache. Some readers might recall the days of their youth when fear of being picked on by a teacher or a classroom bully forced them to feign a bellyache to temporarily avoid the dreaded schoolhouse.

Our conversation got me thinking about a Halloween from 30 years ago. A few days before the 31st I asked a friend to accompany me as I drove my daughter and her friends to their favorite houses in Sault Ste. Marie where the owners always gave the best treats. My friend agreed it was a good idea. Through many years of sabotaging his relationships until they became defunct, he learned that saying YES at the first request saved the inevitable squabbling that resulted if he immediately said NO. He also learned to bide his time. By six o’clock on the evening of the 30th he called and said he was getting the sniffles. I extended my condolences and suggested he drop an Alka-Seltzer into a glass of warm water. 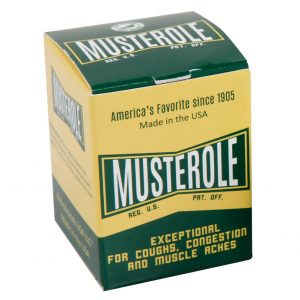 The following day he called at 8:00 a.m. and said the sniffles were now a full-blown cold. I told him to rub some Vicks on his chest, warm a flannel rag, and place it over the Vicks to accelerate the healing. Such a remedy always worked when I was a kid. If good old Vicks had no effect, I suggested he get out Musterole, a medicinal rub he had never heard of so I explained what it was and told him I had a jar of it in my medicine cabinet. I would bring it to him and he would immediately get relief and be fit as a fiddle to make the Trick or Treat rounds that evening.

As I hung up the phone, it occurred to me my friend was pulling his version of the TNB. The ache had simply moved from his belly to his nose. When the phone rang later that afternoon, I didn’t need caller I.D. to know who was on the other end. With all the self-confidence of a well-trained actor, the weak voice, nasal tone, and intermittent cough assured me he was going nowhere. He was staying in bed with his affliction.

The day after Halloween, my friend’s illness disappeared as quickly as it had appeared. In the morning, he stood at my door looking robust and healthy. All signs of a cold or anything more serious had vanished. He was eager for breakfast at our favorite restaurant and a little gambling at the casino. After a hardy meal and a few unsuccessful turns at the slots, he returned home a happy man.

This only goes to show that the Thursday Night Bellyache is a temporary ailment guaranteed to turn Friday or whatever the next day is into a very pleasant one. Being a woman of pristine character, it’s a stunt I’ve never pulled, but I understand why it comes so easily to some fellows. Whether a kid or a man, sometimes it’s easier to lie than tell the truth and face an argument. If a child has a bellyache due to fear, it’s understandable he wants to stay home. If a gent agrees to accompany you on a Halloween outing but then falls ill, he’s avoided the predictable bickering that will result from his change of mind.

Thinking back over the years and all the tiffs I created by telling the truth, perhaps I should have conjured up something as ridiculous as the TNB and saved myself a whole lot of aggravation. And if I had purchased stock in Vicks VapoRub, Musterole, or Alka-Seltzer, today I might be a wealthy woman. Of course, like all things, the bellyache act is only good for a certain length of time. If used too often, parents and friends get wise to the shenanigans, and like it or not, the jig’s up. Eventually, the youngster accepts his fate and his belly gets better as he gets braver and school and teachers are not so scary. And what happens to the friend with the one-day sniffles? Well, I guess that depends upon your level of tolerance for baloney. 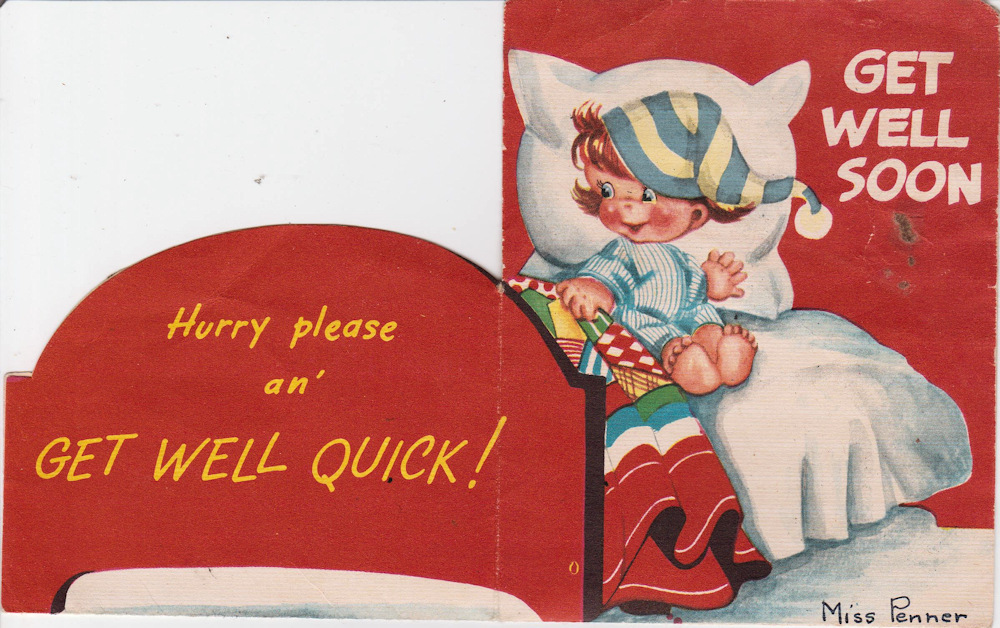