Home Reminiscences Dishes: My One and Only Weakness

Dishes: My One and Only Weakness 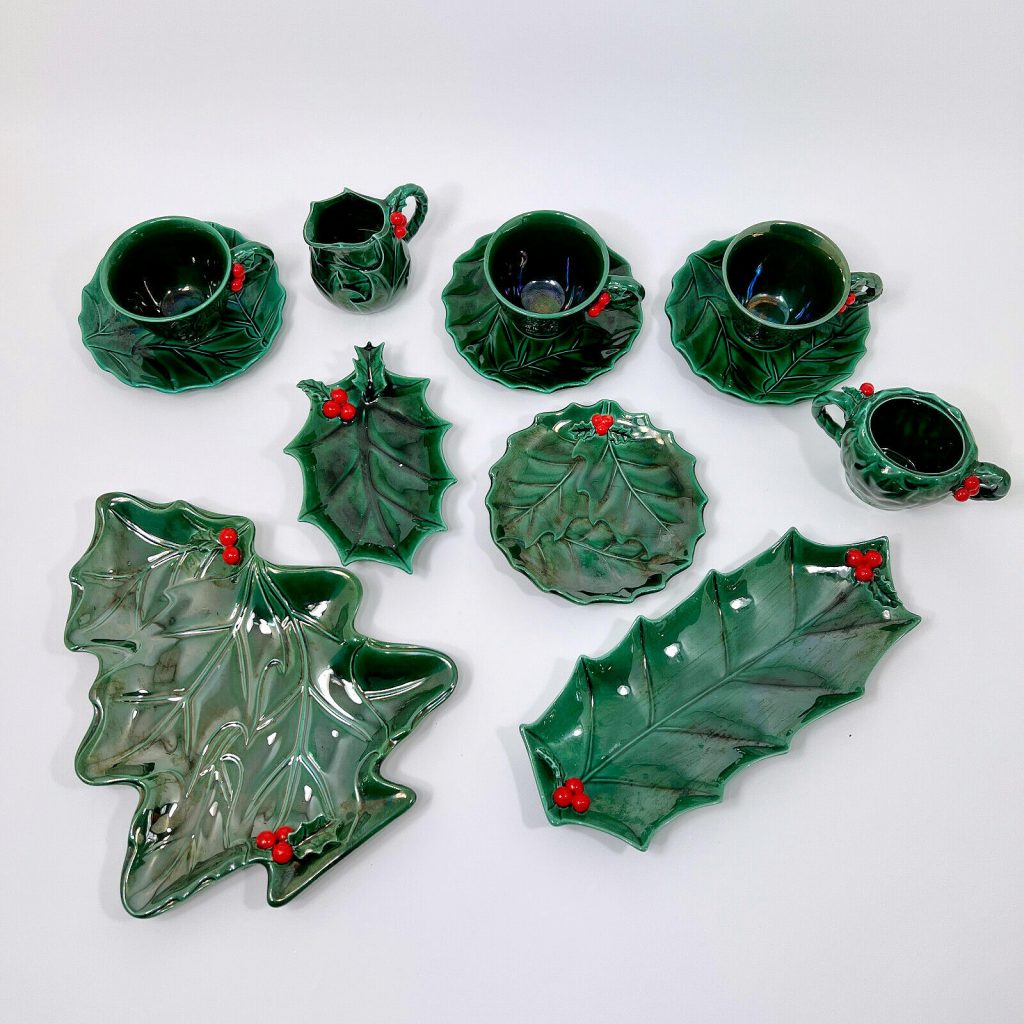 Prior to selling them last year, every December I got out my collection of Christmas dishes. Some had trees on them. Others were vintage green with red holly. One set depicted snowmen. Over the years I purchased miscellaneous sets from various places because dishes are my weakness. I can bypass racks of clothing and stylish winter boots sporting three inch heels without giving them a second glance. Fancy jewelry, exotic perfumes, leather purses, and all electronic gadgets are equally ignored, but put dishes before me and my knees turn to rubber. 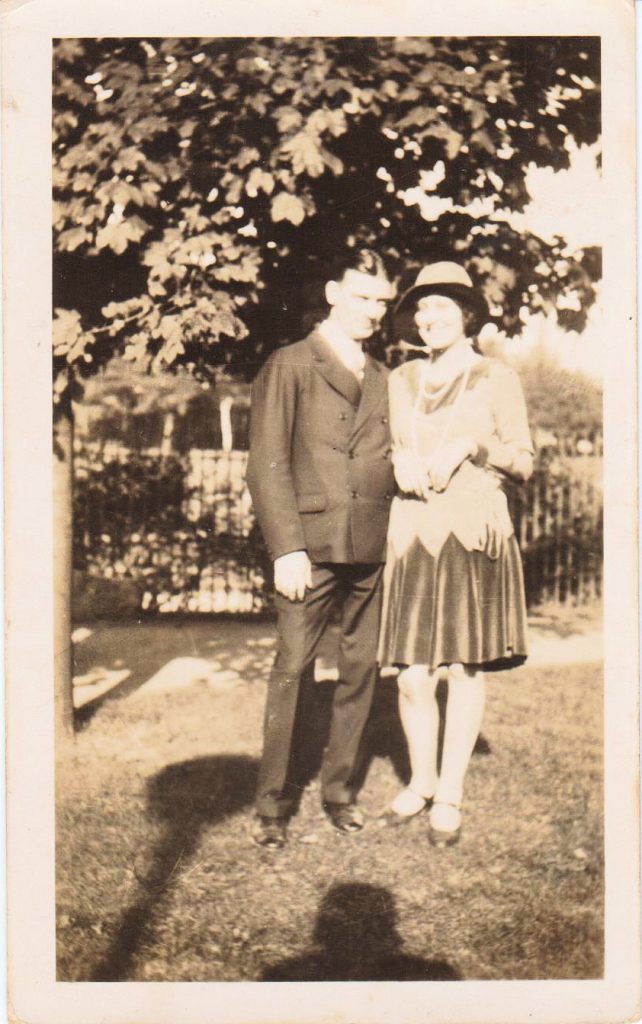 My love of dishes began when I was young. Every summer Aunt Marie (pictured at right) and her husband drove from their home in Detroit to the old homestead across the road from where I live. They always brought gifts and boxes filled with odds and ends, but the only things I recall are the dishes. The intricate designs and English bone china always fascinated me. Uncle Francis was from Massachusetts. He considered farm people unrefined so every July we received stuff guaranteed to lend a little class to us yokels.

Aunt Marie was Mom’s older sister and wanted her to have the best of everything and I guess that included dishes. Ours were a little on the sorry side. Some were cracked, some chipped, no two matched, and all had seen better days. When Mom married Dad, she didn’t have far to move. Her farmhouse was directly across the road from Dad’s. I imagine she brought a few special things with her, but the contents of her new cupboard belonged to Gram. Mom didn’t want to intrude so all her dishes stayed home.

On one of her yearly trips, Aunt Marie gave Mom a complete set of matching dishware. Great care was taken to keep them looking like new. They graced our kitchen table only during major holidays. Afterwards we carefully washed, wrapped, and returned them to their boxes. Then it was back to the old beige plates, Peter Pan glasses, and enormous white cups.

It’s funny how something as simple as a fancy dish can stir a kid’s imagination. At some point in my childhood, I decided I would never set a table with mismatched dishes, and I silently declared war on ugly white cups from Kresge’s. I was determined to set a table as stylish and memorable as my aunt’s.

My sister and I visited our aunt and uncle in 1959. It was our first Greyhound bus trip to Detroit, and as two bumpkins it didn’t take much to excite us. I don’t remember our reaction as we crossed the Mighty Mac, but I do recall our amazement at the fee involved in using the bus terminal restrooms. For a dime, the toilet was all ours. Luckily, seasoned travelers were among the group and probably noticed our bewilderment. Kind ladies held the door open and one-by-one we avoided the charge and left our deposits.

Aunt Marie met us at the bus station in downtown Detroit and drove us to her home. It was a lovely, two-family brick affair on Stoepel Street in Detroit. She and Uncle Francis lived downstairs and a widowed school teacher and her son rented the upstairs. I don’t know how my sister felt, but the house was the most beautiful I had ever seen. As a country kid, I thought it looked like a palace. As well as a kitchen with a sink and running water, an electric stove, and a breakfast nook, there was a separate dining room and a china cabinet filled with one set of chinaware and two Bavarian tea sets my grandmother had brought from her homeland. My fate was sealed.

In 1968 I married and moved to Colorado Springs. With a glut of military installations in the area, I had a hard time finding employment. As a computer programmer, my husband had no problem in securing a job, but his weekly net pay was only $75.39. That measly amount stuck with me for some unknown reason. If we had a quarter left over after paying bills, it went towards my dish collection. Chuck was an easy going fellow. He liked to indulge his young bride. After Saturday morning breakfast, we scouted out resale shops for anything that caught my eye in the dish department. 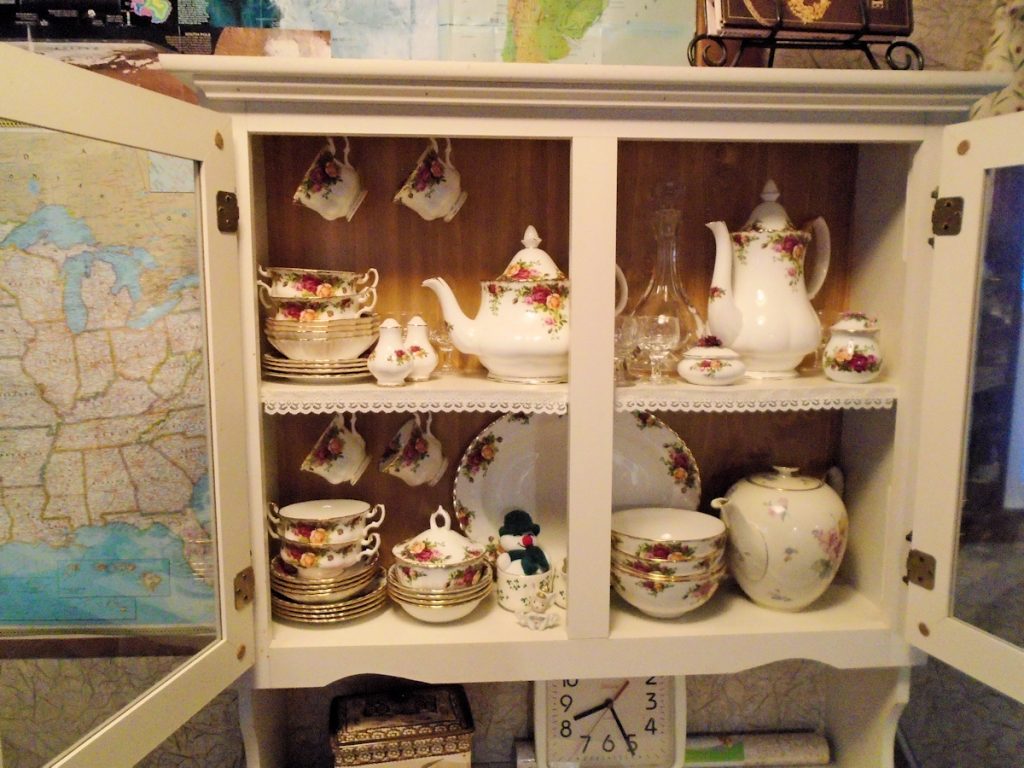 When we entertained, it didn’t matter if the roast beef was chewy or the chicken so dry it was more like a weapon than a main course. Nobody laughed when Chuck pulled the giblets out of a cavity in our turkey after I had told his parents our bird didn’t arrive with its innards. And not once did anyone mention my attempt at baking a pecan pie where I added three cups of sugar instead of 1/3 cup. My inexperience as a cook was forgiven because my porcelain was spectacular, the centerpiece was magnificent, and brass napkin rings held linen napkins. In my opinion, it wasn’t about the food. It was about my lovely table. Who could expect more from a newlywed?

Then the years zoomed by, two divorces ensued, my daughter moved away, but my dish inventory continued to grow. I purchased a service for eight of Royal Albert “Old Country Roses.” Next I found a set of green dishes at a resale shop with the theme of Dickens “Old Curiosity Shop.” I bought a Lenox “Butterfly Meadow” set from QVC. My largest set was a service for 14 of Haviland “Blue Garland” made in Bavaria, Germany. My collection went from the absurd to the profound depending upon where it was purchased.

Some came from Hudson’s in Detroit. Some from Walmart, Goodwill, Salvation Army, antique shops, and yard sales. Regardless of their origin, they were all special. If I had entertained, my table would have been worthy of a photo spread in “Martha Stewart Living.” But I stopped entertaining years ago and sold most of my dishes. They were so special I never used them, not even the Christmas ones. As I grew older, I got them out but stacked them next to my supply of paper plates.

Like my dear departed aunt, collecting dishes was my hobby. Unlike her, using them was a different story.