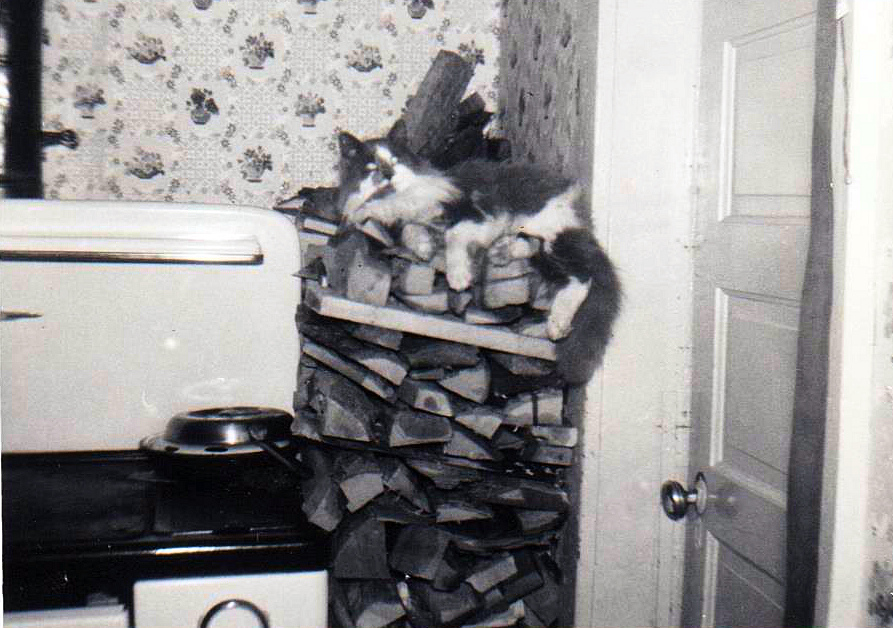 Puff the Cat guarding the fruitcake

Say what you will, but I like fruitcake, my version anyway. I bypass all the candied, sulfite-riddled sticky peel and go straight for dates and nuts. I drench them with frozen orange juice and a good amount of amaretto and let them mingle overnight. In the morning, I get out my heavy duty Kitchen Aid stand mixer and combine the best non-GMO ingredients available. I wed them to the dates and nuts, pop them in small loaf pans, and put them in the oven. The spice and molasses aroma is only surpassed by the taste of the best fruitcake ever. Honest! 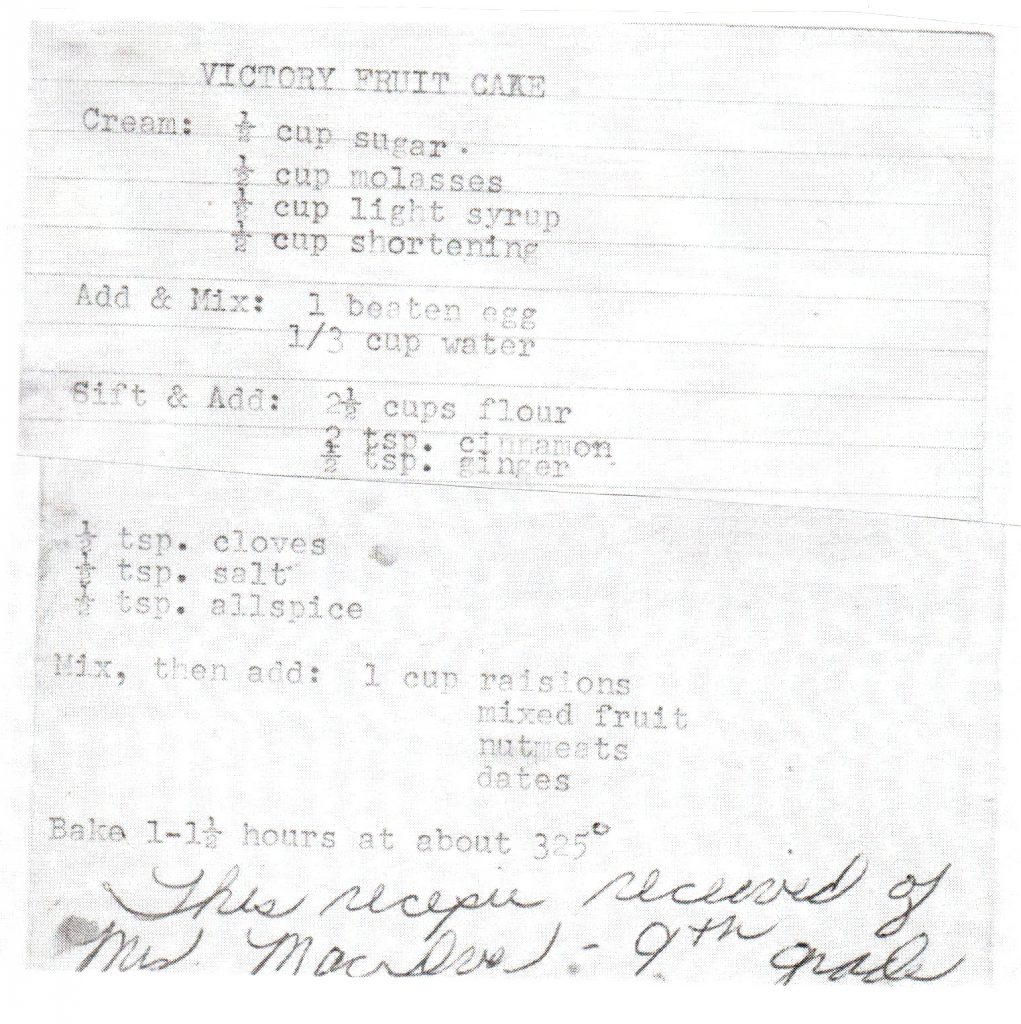 Mrs. McIver, my home economics teacher throughout my high school years, tried her best to make teenage girls appreciate the art of homemaking. Along with teaching us how to sew, set a table, and create Christmas crafts, we made jam, canned fruits and vegetables in the fall, and baked various treats in the winter. Between classes, boys came running towards our room when they smelled cookies warm from the oven.

In the spring we concentrated on 4-H sewing projects. If our sewing didn’t meet her standards, Mrs. Mac wiggled her sharp pinky fingernail underneath our edge-stitching and loosened it. We dreaded that little fingernail because it meant we had to pull out the stitches and start all over again. I took to sewing like a cat to cream and for many years made most of my clothes. My Detroit friends were shocked when I showed up one day wearing a blouse and slacks from Crowley’s Department Store instead of something I had cut from a Butterick pattern and stitched together.

Besides sewing, much of what Mrs. Mac taught us stuck with me. For years I used her recipe for Christmas Sugar Cookies and Divine Divinity Fudge. I often baked Light as Air Baking Powder Biscuits to go with the Chinese Pot Roast recipe, but there was one recipe I never attempted—Mrs. Mac’s Stuffed Lobster Tails. Unbelievable as it seems, an old recipe card testifies she bought frozen lobster tails and showed us how to prepare them. I have no idea where she found them and even less idea why she thought Upper Peninsula farm girls would be interested in something from the ocean when we were surrounded by fresh water whitefish, perch, and trout. 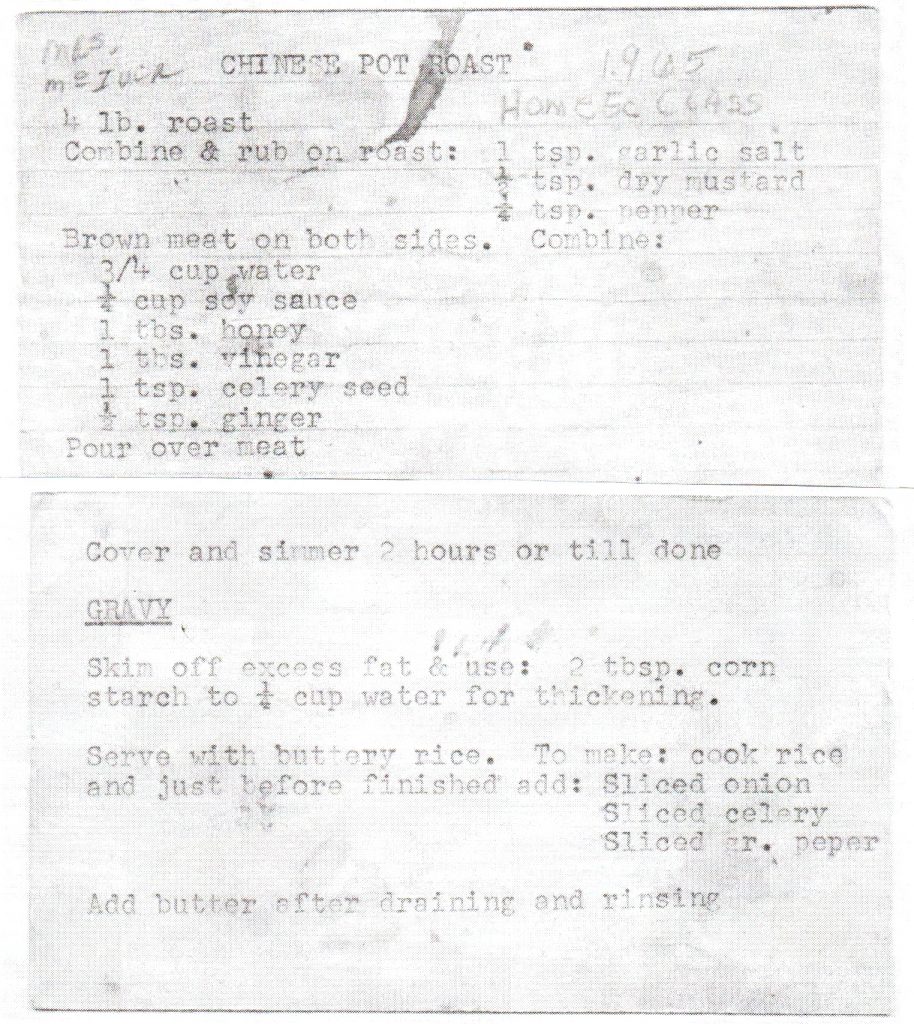 Although I never mastered crocheting, during my senior year I managed to win the Betty Crocker Homemaker of Tomorrow award. In other words, I knew how to dust furniture, make a bed, wash dishes, and clean silver. Eighteen-year-old girls of today would expire laughing at the things our teacher thought were important, but they don’t know what they’re missing. I took five years of home economics and many decades later I still have fond memories of just about everything Mrs. Mac taught us except her Victory Fruitcake from World War II. According to a stained index card I found in my recipe box, I was in the ninth grade when we attempted this holiday staple.

I remember coaxing Mom into making it a few days before Christmas 1961. We got out our largest cast iron frying pan and lined it with a brown paper bag cut to size. I rubbed lard into the pan and the paper. In those days, there was no such thing as parchment paper, at least not in the stores of Sault Ste. Marie, and there was no Pam Cooking Spray. Mom’s Sunbeam probably couldn’t handle the batter’s weight so most likely Dad was called away from his barn chores and asked to stir the brown cement, wrestle it into the pan, and put it in the oven.

When a fruitcake was in the oven we were allowed to walk at a normal pace in the kitchen, even jump or stomp or chase the cat if the urge came over us. Regular cakes had a tendency to fall from the slightest kitchen commotion, so we tiptoed around, but a fruitcake was hardy. Nothing bothered it because it didn’t rise any higher than a whisper. When a delicious aroma filled our kitchen, Mom decided the cake had suffered long enough and carefully removed it from the oven. Long before they became fashionable, Dad made trivets from birch wood disks, and the fiery hot pan was placed upon one and left to cool.  Eventually, the cake was removed and the paper peeled away.

I wish I could say we had baked a masterpiece. I wish I had fond memories of a glorious, moist cake gracing our Christmas table that year, but I don’t. What I remember most is a blackened, rock hard piece of artillery no human could consume without mortal consequences. We tried to fix it with a slather of white frosting and red cinnamon dots, but it was hopeless. Gram usually baked our fruitcakes because hers were regarded with respect and admiration, but I had insisted Mrs. Mac’s recipe was a winner.

Don’t ask me what became of that holiday treat. It might have been fed to the pigs or maybe Dad used it to level a leaning shed. What I do recall is Mom saying Victory Fruitcake didn’t quite live up to its name.