In Memory of Queen Anne

Dad wasn’t much of a shopper, but every Christmas there was a box of Queen Anne Chocolate Covered Cherries underneath the tree for Mom. It was the only candy they both knew nobody would raid. Mom didn’t have to hide the box in the laundry basket or a far corner of the pie safe. She could leave it out in plain sight. That is until we kids discovered the liquid center and outer chocolate coating were delicious.

Once the cherries were licked clean and fed to the dogs, Mom realized a hiding place was necessary. She became quite creative. Heat from the kitchen woodstove didn’t reach the pantry so that was a good spot to ferret away candy. The pantry in most farmhouses was a little room. When modernization took off in the 1950s, such rooms were often turned into bathrooms, but not in our house. Our pantry was a pantry until the day the house came down. Well, anyway, getting back to Mom’s challenge. We knew most of the spots where she kept sweets. The bridge mix was usually stored in a cookie jar we never used. It was easy to pick through the mix and avoid the chocolate covered raisins. Naturally we denied any knowledge of the disappearing candy. The turkey roaster was used twice a year then pushed to the side of the pantry table and filled with miscellaneous non-food items. It made a great nest for Squirrel Nut-Zippers.

We could reach the pantry shelves so unless Mom got out the stepladder and hid Queen Anne on the top shelf she wasn’t safe from our snooping. There was an old milk separator in one corner that held great secrets until we discovered it was one of Mom’s hiding places for sweets. I guess the days before Christmas dragged on. When we tired of sledding, playing Jude’s Chinese checkers, jacks, or Old Maid, we rummaged for candy. Necco Wafers were great if we played church. B B Bats were okay in a pinch and Black Jack Taffy was always welcome. Obviously, then as now, kids loved candy, but not just any kind. We were what might be called candy connoisseurs. We wouldn’t touch Gram’s pink peppermints. They tasted too much like medicine. And Dad’s hard candy filled with jam stayed in its canister. When some of the relatives joined us for Easter dinner, Dad always told us to get out the canister and pass it around which is what we did every spring knowing full well that same nephew of Dad’s would give him another gift of ribbon or rock hard Washburn’s.

The saga of Mom’s attempt to hide her chocolate covered cherries ended like this. We graduated to Whitman’s Samplers and left Queen Anne alone. Mom was free to enjoy Dad’s present as even he wouldn’t touch the cherries unless one of the dogs was nearby. 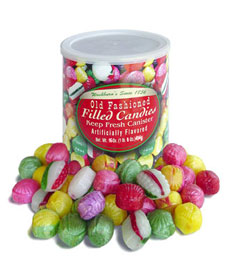