Home Reminiscences It’s Festivus for the Rest of Us

It’s Festivus for the Rest of Us

Festivus is a fictitious event inspired by Don O’Keefe’s family of Mt. Pleasant, MI and made famous on a “Seinfeld” episode. O’Keefe was one of the writers for the show and mentioned the imaginary holiday his family celebrates on Dec. 23. His dad was tired of all the fuss and bedlam of Christmas so in the 1970s he came up with the idea of a common sense alternative to such madness. I never watched “Seinfeld” so when my daughter wished me a “Happy Festivus,” she explained this ridiculous, albeit entertaining, fête.

For readers unfamiliar with it, Festivus goes like this: An aluminum pole is anchored in a wooden or steel base and replaces the traditional Christmas tree. Decorating the pole is optional. Some folks prefer to keep it in its natural state while others wrap tinsel or strings of lights around it. Next is the “Airing of Grievances” whereby family members are allowed to “air” their complaints, gripes and criticisms of siblings and parents. I suppose even parents are permitted to express their true feelings about the behavior and habits of their offspring or spouse.

The third event is the “Feats of Strength” wherein the head of the house is wrestled until defeated. Unlike “real” wrestling matches, the person chosen for the honor of pinning the master to the floor has the option of taking part or declining. However, squirming out of the match is only allowed if a legitimate excuse is offered such as going home to feed the chickens.

Now before you start shaking your head and saying Festivus is sacrilegious and an affront to all Christians, read on. This fake celebration is for us oddballs who shun the commercialization of Christmas. As a secular parody, it’s a comical comment on the pressures inflicted on people during this time of year. It’s for folks who resist the craziness of the season. It’s a poke at the mad shopping dash for the best deals. Most Festivites are generous people. It’s not the gift giving we resent. It’s all the commotion surrounding it. Entering any store this time of year can be dangerous especially in the toy or electronics aisles.

Sometimes a Festivus pole is placed next to an outdoor crèche. This creates a ruckus when people fail to view it as the bit of nonsense it is. I don’t know which is more ridiculous—an aluminum pole symbolizing absolutely nothing or a plastic doll from China symbolizing Jesus. Baby Jesus is an adult now. He’s probably tired of seeing Himself displayed as a helpless infant in a manger exposed to the elements. Relax, church-goers. No one is criticizing your tradition. There’s no need to get excited and throw a fit.

I’m not a card carrying Festivite. I don’t have an aluminum pole in my living room, and I haven’t completed a grievance worksheet. I have no intention of attempting any feat of strength with anyone, nor will I contribute to the Human Fund, a Festivus fictional charity. I won’t burden folks with an account of the Festivus miracles I’ve witnessed, but that’s all I’ll promise. Anything more would be compromising my principles.

If Festivus took place a few days prior to Halloween when horror costumes are the norm, it would pass with little notice, but because it’s two days before Christmas, it tends to provoke deep emotional responses. I don’t see the point in getting hysterical about something as silly as O’Keefe’s family festivity. 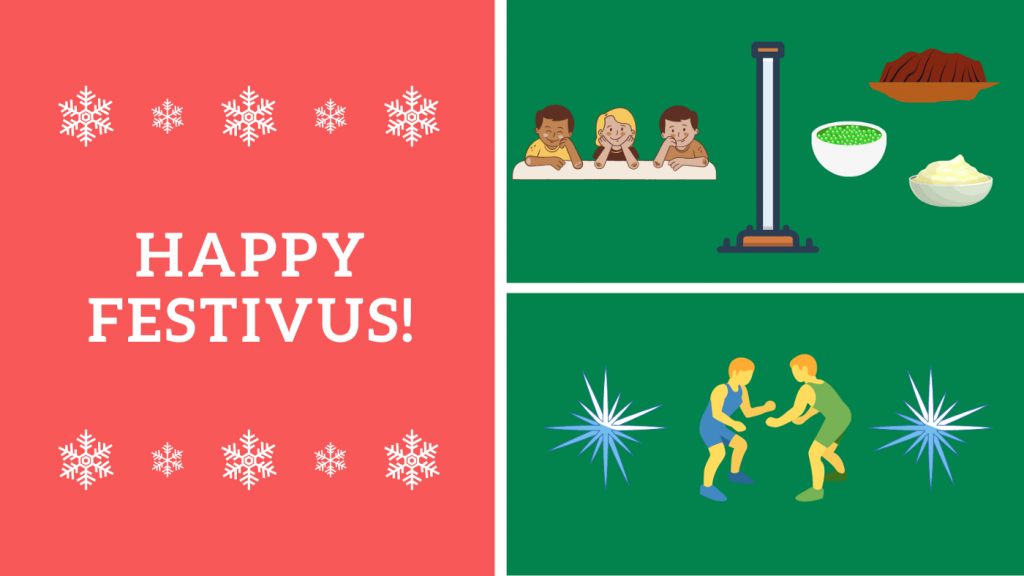