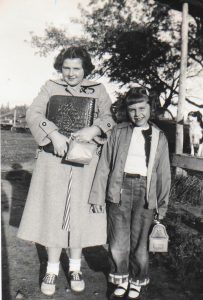 Sharon with big sister Jude (at left) circa 1958

Summer slipped away like warm rain running down a drainpipe. Autumn winds carried wildflower seeds in all directions ensuring next year’s pastures would be abundant with Queen Anne’s lace, yellow mustard, bluebells, and delicate pink Roses of Sharon. School bells clanged the opening of another academic year. Girls in new corduroy jumpers and saddle oxfords, boys in stiff new denim jeans and sturdy, lace-up brown shoes waited for the yellow monster to roar down their quiet sideroads, pick them up and carry them away to the dreaded schoolhouse.

One day little kids were winning ribbons at the County Fair, laughing as they spun around on the Tilt-A-Whirl, and eagerly devouring mountains of cotton candy. Less than 24 hours later, they were expected to sit at attention in a classroom smelling of floor wax and bleach. Somehow they were supposed to take this quantum leap from freedom to incarceration without flinching a muscle.

Such a drastic transition is a physical shock to the system. The first day of school often lasts only three or four hours which I guess is meant to soften the blow. A short day might help to some extent, but it takes time to adjust to any new routine, especially one as confined and regimented as a classroom. Nature seems to understand something monumental happens the day after Labor Day. She cooperates by turning on the faucet. Rain often ushers in the new school year. It cancels outdoor play, making the return to stuffy classrooms more bearable. It’s easier to concentrate on math when thunder grumbles and lightning threatens to bring down the flagpole on the principal’s new car. 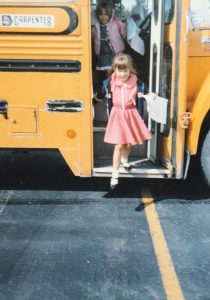 I have no memories of the first day of school in any grade except the 11th. I was a junior and Kenny Nixon was a senior. He was the best-looking boy in Brimley. He sat next to me in assembly. I thought he was going to hold my hand just like last year, but Kenny had other ideas. He asked for the return of his class ring. I was crushed. Our uneventful romance was over. A Nixon had finally ousted a Kennedy.

Achieving academic success is a minor task compared to navigating the labyrinth of social studies. Not the class, of course, but the interaction of students. As September gives way to October, pecking order is established, and the rest of the school year is clear. Nerds, clowns, socialites, and misfits find each other and cling together for safety. Loners find their own way. And girls who thought their future was with the handsomest boy in school soon realize they can’t depend upon a sophomore crush to last through summer vacation.

Memories raced back this morning as I heard the bus roar down my sideroad. I watched it sail by my window and thought of my old school bus. It was red, white, and blue. When the yellow one arrived, some of us thought it was a disgusting color. Nobody wanted to ride in a “mustard jar.” Unless, that is, a boy like Kenny Nixon was sitting next to us. With stars in her eyes, a girl can overlook just about anything.