Two women, both loners who had rejected a safe, predictable lifestyle and turned their back on tradition, met one April afternoon in 2018 and talked for an hour. Although strangers, they soon discovered they had much in common. At the age of 50, each had made a major decision in her life. The paths they chose were entirely different, but the reason why they chose them was similar: “Live your life to inspire others and you, too, shall be inspired.”

These were the parting words spoken to me by Bernice Ende, otherwise known as Lady Long Rider. Her journey of 30,000 miles didn’t begin with one small step. It began with the long stride of a Tennessee walker named Pride, a faithful equine friend who despite initially wanting to return home, kept going at the urging of Bernice.

So what does a woman who lives alone in Michigan’s Upper Peninsula have in common with a woman who saw a vision of herself riding horseback from her cabin in Montana to her sister’s home in New Mexico? Not much at first glance. It’s only when we were seated at a Burger King booth the parallels were obvious. Mental strength, independence, a sense of destiny, and a voice deep within our spirit that pulled us out of our comfort zone and would not let go until we let go of all that was familiar. It takes time to heal from the hurts life inflicts upon us. Often we hide our pain behind a façade of activity until we feel strong enough to obey that inner calling.

“As time passed I realized there was a void in me that wasn’t being filled by the ballet lessons I was teaching or the horses I was training,” Bernice said. “I know what you’re thinking as you look at me. You’re wondering if I really taught ballet and played classical Bach minuets on the piano. The woman you see before you is dressed in old, homemade clothes, worn-out Ariat boots, and is wearing a bandana underneath a Sunbody western hat. My face is lined from countless hours in the sun. My hands are small yet have the strength of steel. I am an enigma to you.”

Bernice paused for a moment and sipped her coffee. I noticed her hands as they gripped the paper cup. They were small, but capable of keeping Pride under control instead of allowing him to bolt homeward. In 2005, Bernice had ridden less than 15 miles from her cabin when she stopped for the night, unsaddled Pride, pitched her tent, and was ready to settle down, but Pride had other ideas. He wanted to go home. Bernice knew she had no choice but to throw the saddle and gear back on him and head into the darkness. 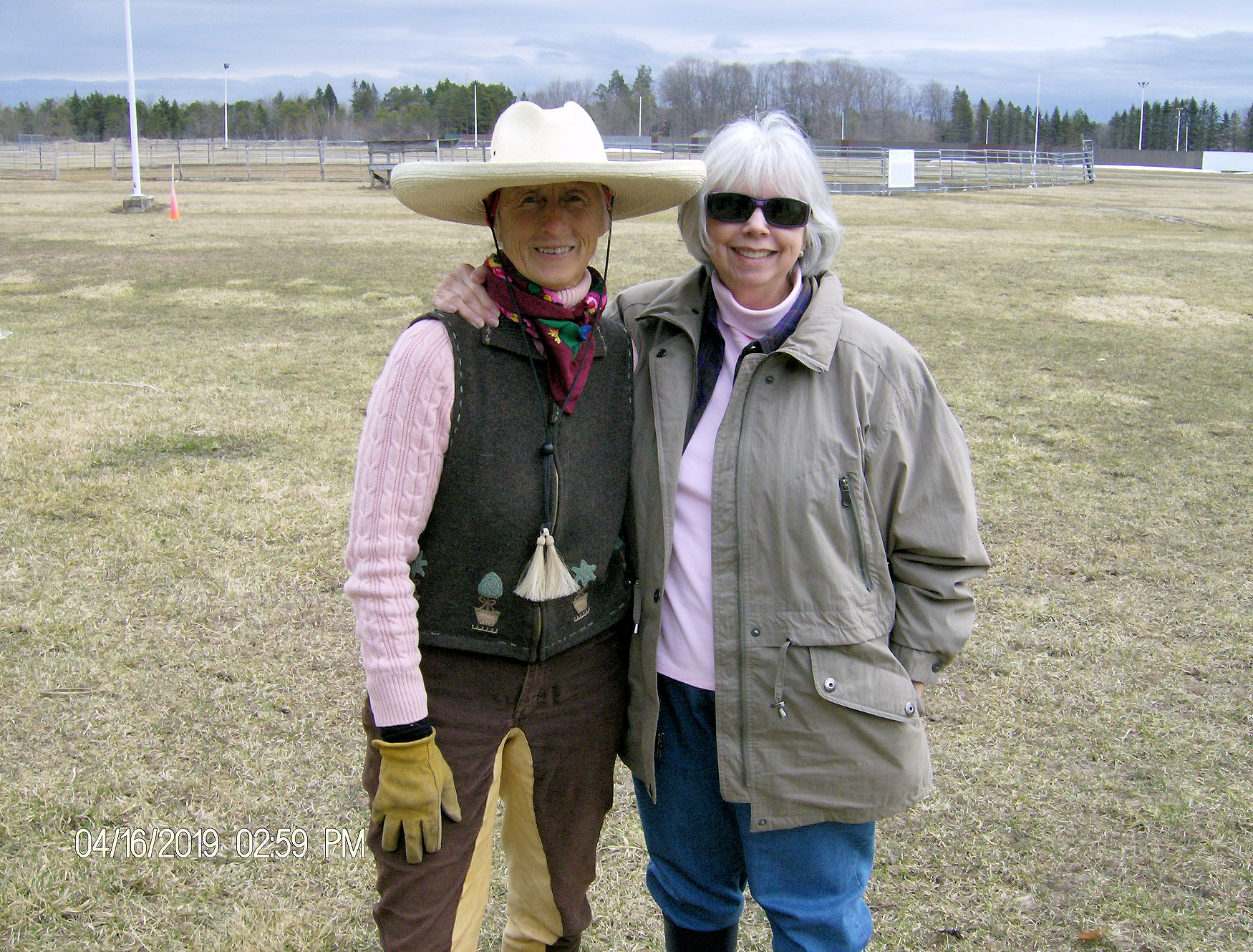 I could tell you how she made it through that rainy, cold night and all the hundreds of days and nights that followed, but my retelling couldn’t possibly be as exciting as reading her book, Lady Long Rider: Alone Across America on Horseback. Her first ride taught her how little she knew about riding for endless months and the many challenges that lay before her. The countless noises that filled the night, the burning desert sun, the bone-chilling mountain cold, the wild animals she encountered are all part of her story, but as she said, it is not fun. It’s hard work that demands endurance and an ever-watchful eye for dangers that could spell disaster.

Ten hours in the saddle every day put 30 miles behind her on that first ride, but the grueling pace brought excruciating pain to her physical body. It was the beauty of her surroundings, the peaceful clip-clop of Pride’s hooves when he finally realized he wasn’t going home, and the knowledge that she was doing something she had dreamed of as a child that gave her the determination to ride on. It took her nearly five months to reach Albuquerque, but she had done the impossible. She had ridden the first 2,000 miles of a journey that over the course of a dozen years would take her from one coast to the other. Although at the time she didn’t know the term existed, she had become a long rider which means she rode continuously on horseback for at least 1,000 miles. The Long Riders’ Guild is an international association of equestrian explorers.

“Self-discovery is a path that must be taken alone,” Bernice says. “People tried to talk me out of making that ride. They probably thought I was crazy. A woman of 50 going alone in search of an elusive freedom couldn’t possibly be in her right mind, but I had to do it. Something inside me wouldn’t let me rest. Something was pulling me to ride. A life without fear is freedom. When we leave our normal routine and are stripped raw, we discover who we are. I’ve slept in barns and ditches and bartered playing the piano for food at community centers. I’ve covered my horses with sheets to protect them from flies. I’ve worn the same clothes for months on end. I’ve eaten more canned tuna than most stores sell. I’ve walked hundreds of miles between my two horses. Even my beloved dog, Claire, walked 7,000 miles before I taught her to ride on the packhorse.

“The many miles have changed me as I knew they would. My empathy for others has increased. There’s a river of humanity that helped me along the way. Strangers opened their doors to me, gave me and my animals food and water and a place to sleep. I saw the goodness in people, the willingness to help when I was so tired I could hardly stay in the saddle.”

Then Bernice said it was time to go. “My horses are calling me,” she said, so I took her back to the fairground where her Norwegian Fjord draft ponies were stalled. “Fjord horses are one of the oldest breeds,” she explained. “They’re strong and agile, capable of carrying heavy loads, sure-footed, mild of temper, and the perfect breed for long rides.” She showed me her sleeping quarters, a cubby hole in the horse trailer no larger than a laundry basket.

I started this story by saying two older women made a decision that forever changed their lives. My journey took me no farther than my living room where I write short stories, a newspaper column, and conduct interviews. Bernice’s decision has taken her from one end of the country to the other. Her spirit of adventure, her iron will to push herself to walk and ride thousands of miles, and her willingness to endure hardships most of us could never face is unparalleled. The common bond we share is the ability to step into the unknown, encourage others to do the same, and never allow fear to become our master. 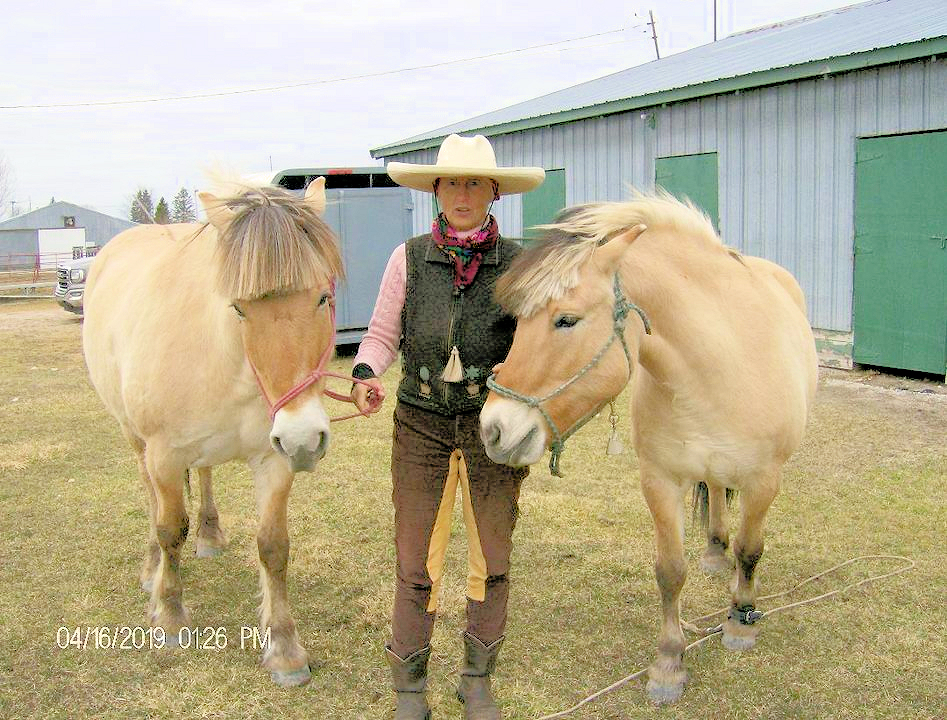 Bernice and her two best friends