Home Reminiscences The Seasons of 1957

Growing up on my sideroad in the 1950s was a lot different than it is today. In those days, the county lacked the sophisticated equipment required to level snow banks. As kids, we often dug holes in the four feet high banks and hollowed out forts. We stockpiled snowballs and created our own wireless amusement by having snowball fights. There was only a handful of kids on the road and most of us were related, so our fights were friendly, if fierce.

When the gravel road was icy, it wasn’t uncommon to lace up ice skates and practice skating on the road. We never worried about cars because there were none. The people to the left of us usually took M-28, and the two families to our right went out Six Mile Road. Obviously, Dad wasn’t going to run over us when he came home from work at the Soo locks where he was as an oiler on the Shamrock tug, so we didn’t give a collision with an automobile a second thought. Today the road is paved and looks like a minor thoroughfare before nine in the morning and after five in the evening.

April was a challenge for kids and cars. If the frost left slowly, which meant freezing at night and melting a little during the day, cars could usually make it to the corner without getting stuck. However, if the frost left fast, the sideroad became a muddy, mucky mess. Often the county put up a “Road Closed” sign at either end of the road. The school bus wouldn’t venture down because the driver knew he’d never make it through. 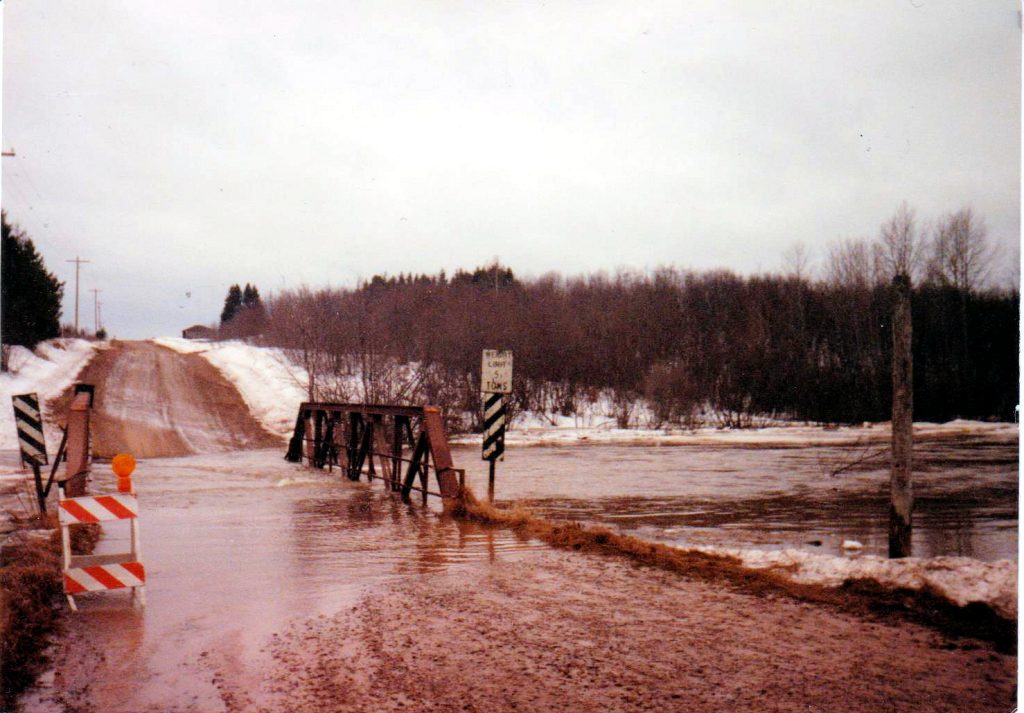 Flooding at the old bridge

There was only one way to catch the bus and that was to walk to Six Mile or the Old Brimley Road as we referred to it. It was a mile walk, but at 6:45 in the morning I don’t think anyone grumbled too much. My sister and brother joined our cousin and five kids from one other family that lived by the river down the road from our place. We were heedless of the brisk air and muddy ruts that were frozen or squishy. If it had been a mild night, our boots were covered with mud. Often the mud would suck a boot off, and we would walk right out of it. When this happened, the boot stayed behind while our foot kept going. Many a time I walked out of my boot and had to lean on someone while another kid pulled my boot out of the mud. Then I wiped off my shoe, put the boot back on, and we continued on our way.

Sometimes one of our parents would pick us up after school or met the bus at the corner. Nobody owned a good car in those days, so the driver plowed through muddy ruts as we held on to the seat in front of us. There was no such thing as a seat belt. Our ride was a harrowing one, but we always made it home safe and sound. The county paved a stretch of our road in 1998. Folks who are new to the sideroad have no idea what it was like to drive through mud in the 50s, 60s, 70s, and even into the 1980s. 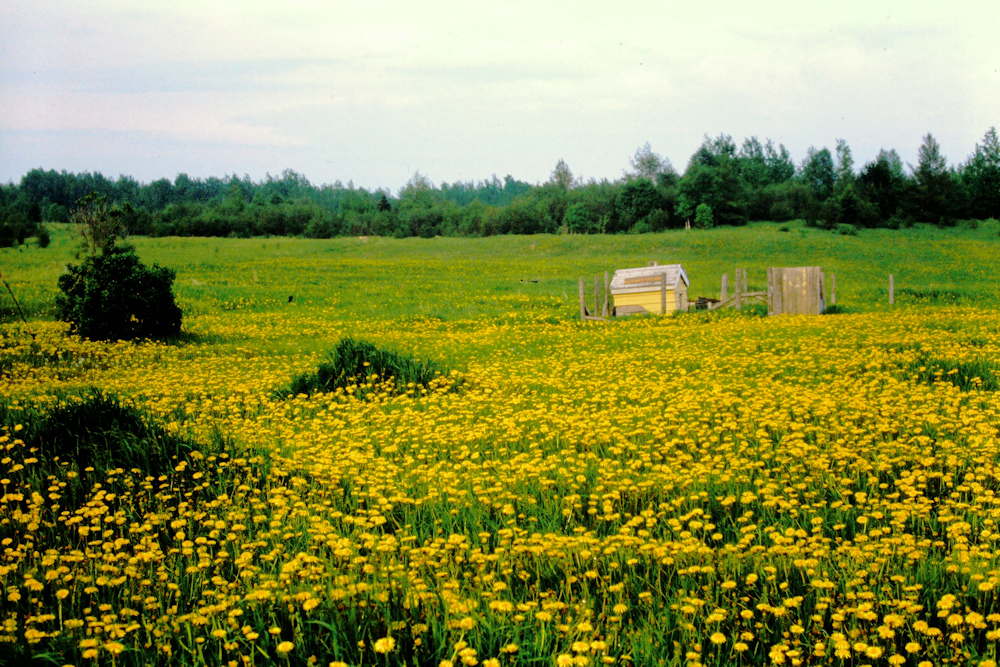 In summertime, we rode our bicycles on gravel. It probably took me two summers before I mastered a two-wheeler. “Training wheels” were unheard of. We trained ourselves by continuously falling until we learned to balance long enough to stay upright. Falling on sharp stones was no picnic. Skinned elbows and knees were the norm, and forget about helmets. If anyone had worn one, we would have considered them aliens from another planet or at least sissies from Dafter or the Soo. 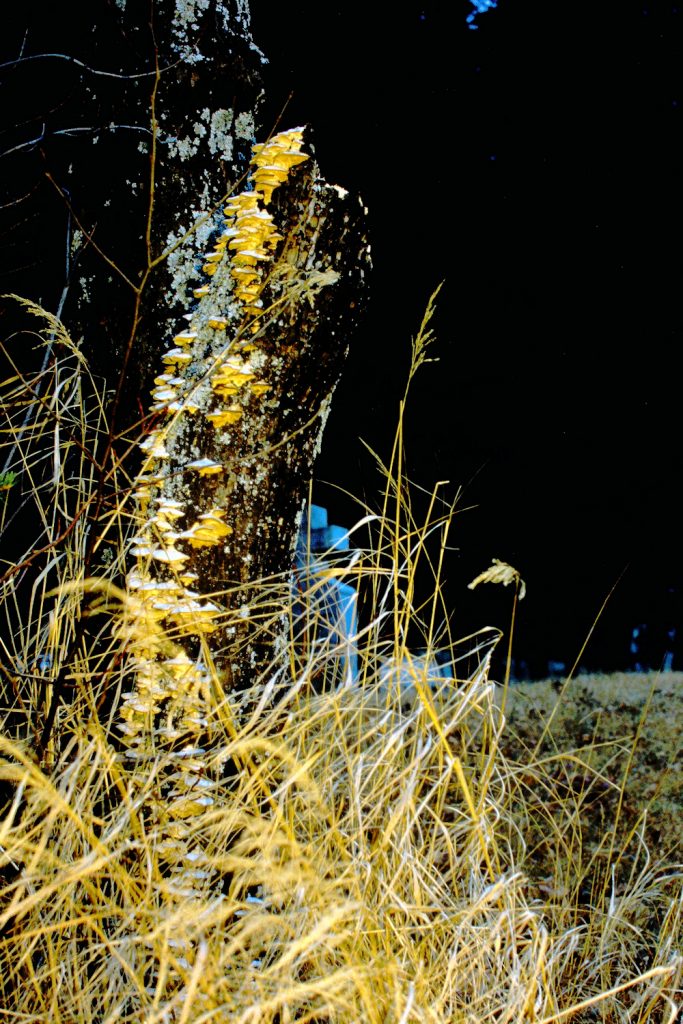 The prettiest time of year on the sideroad was autumn. The woods were ablaze with color, the silent fields had yielded their crops of oats or hay, and the pastures rested from the tramp of cattle. When cold October winds blew into November, our milk cows stayed in the barn where the heat from their bodies lent warmth to the building. As the months passed, calves were born and nourished by their mothers. For awhile they stayed together and got acquainted. Once weaned, the calves were moved to their own stalls and drank warm milk from a pail instead of the original source.

Our barn was originally a log cabin. Many years ago, previous owners built a house and gave the cabin to the cows. A horse barn and chicken coop were added additions. A haymow was constructed, a metal roof nailed in place, and our barn became a welcome home to our animals. The few times I ventured to their winter domain, I recall the smell of hay and freshly cleaned stalls. There was a feeling of peace and contentment in the simple wooden structures that couldn’t be matched by cement floors and metal stanchions that were becoming common in the barns of more affluent farmers.

Although all the seasons were magical, April was and remains my favorite month. After a long, hard winter, April gives the promise that things will get better. The sun stays around longer and shines brighter. Daffodils, crocus, and other hardy perennials brave the frozen ground and make their way to the surface. Robins return to build their nests in the arms of our favorite trees. Rivers overflow their banks. Kids put away their sleds and get out their bicycles. Such are my memories of our sideroad in 1957. 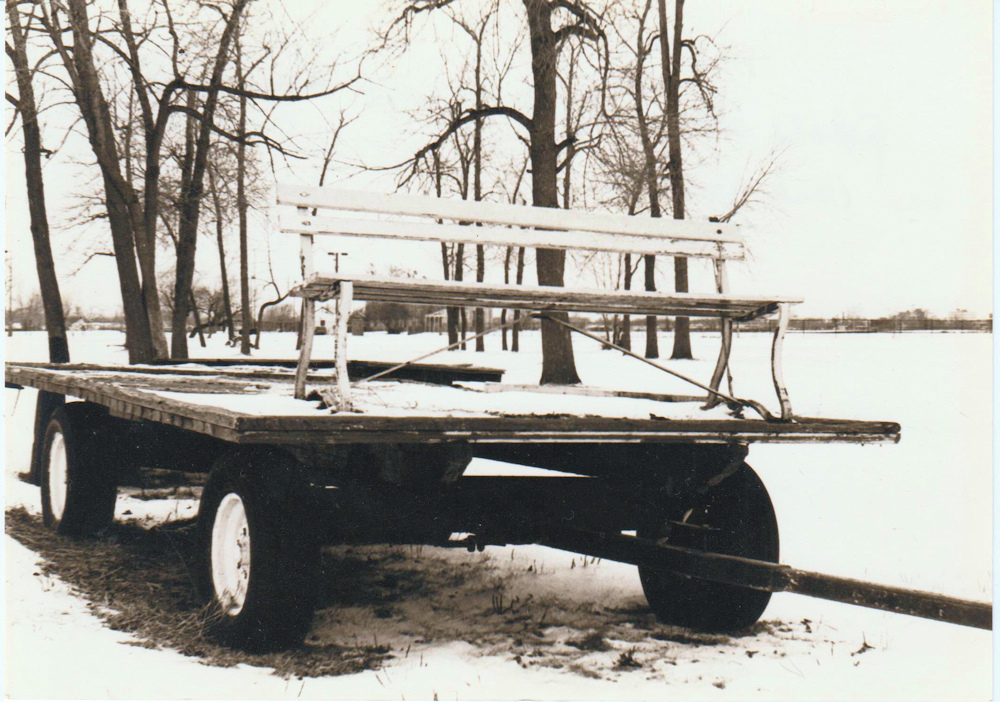