Home Reminiscences Lick the Metal Pole at Your Own Risk

Lick the Metal Pole at Your Own Risk 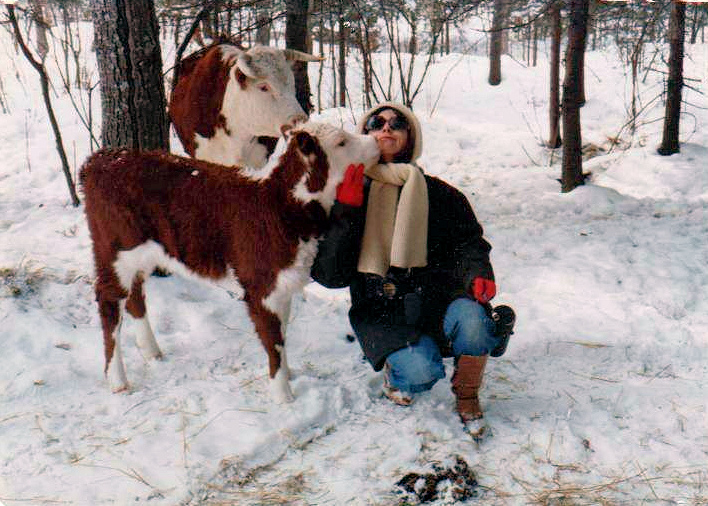 Sharon is no longer afraid of Herefords!

s I grew up on a farm in the eastern end of the Upper Peninsula where winters are long and cold. As a youngster, I loved the first few snowfalls, especially if the snow was packy. It was great fun rolling little snowballs until they grew into giant snowmen dotting our yard. However, the months after Christmas stretched before us like endless white tunnels. In the 1950s, the county’s snow machinery wasn’t sophisticated. There was no such thing as a machine that leveled snowbanks. Snowfalls were heavy and by the end of January the banks were four feet if not higher. One of our favorite things to do was tunnel into them.

When we were young, another favorite winter ritual was licking something icy cold and waiting to see what would happen. The first time we licked a metal pole we were probably surprised. Being country kids, I suppose it didn’t occur to us that a warm tongue would immediately stick to a cold pole. My memory isn’t clear on which one of us attempted the experiment first, but I’m fairly certain it wasn’t fraidy cat me or my brother. Being the oldest, most likely my sister, Jude, took the lead.

Naturally, I followed her example. Jude was four years my senior. At times she could be sneaky. I have no doubt she put a piece of waxed paper or plenty of spit on her tongue prior to licking the pole. Of course her tongue easily released. When I saw there was nothing to it, I did the same. I can almost hear Jude’s laughter as she watched me standing like a frozen dummy with my tongue stuck to the clothesline pole.

Getting a tongue unstuck from such a pole was not as easy as getting it unstuck from a Fudgsicle, something I realized too late. All I had to do was wait a few seconds and the heat from my tongue would release it from the cold chocolate treat. I could continue enjoying the Fudgsicle without fear of losing my taste buds or making my tongue bleed. It didn’t take long to learn that what works in one situation doesn’t necessarily work in all of them.

Sharon vs. the clothesline

One day I made the unfortunate decision to convince myself I could outwit a frozen clothesline pole and show my sister I was just as smart as she. I was fairly clever in school and figured it didn’t take a genius to outfox something as brainless as a piece of metal. Maybe all I needed was an abundance of spit on my tongue or cooling it first with a handful of snow. Maybe one of these ideas would unlock the secret. Then I, too, would have bragging rights that my tongue didn’t stick to anything during winter.

One memory has stayed with me through all the passing years. It was the day I thought I was going to die. Who could forget such a day? I have no idea what month it was or my age, but it was probably January and I was eight or nine. One of my chores was bringing in pails of water for the kitchen. The yellow pail was for drinking and cooking. The green one was for the dishpan and wash dish. This was my chance to prove Jude wrong.

On my way back from the well-house one particularly frosty morning, I made a decision. It was one of those rash decisions kids often make without taking time to think about the consequences. I said I was fairly smart in school. I didn’t say I had an abundance of common sense. Of course my tongue stuck the moment it hit the pole. I was holding the water pails. Dad was letting the cows out for their morning drink. I was afraid of our best laying hen, Plucky, but I was terrified of the Herefords.

Our cows were as tame as housecats, but imagination always bests logic. Dad had already let out the milk cows. I thought the Herefords drank before them, but I was mistaken. So there I stood, stuck to the pole and as scared as a chicken when a weasel invades the hen-house. I was convinced Curved Horn would gore me. As she approached, I wasn’t sure if I should drop the pails and let the water freeze my feet while I tried to pry my tongue lose or just wait to be killed by Mom’s favorite cow. My heart was beating like it wanted to escape from my chest. I said every prayer I could remember and asked God to forgive me for eating all the black licorice and blaming it on my sister. Like every liar caught in a jam, I promised I would never again tell another fib or gorge on too much candy.

Curved Horn drank her fill but instead of returning to the barn where she belonged, she meandered my way. I started to cry. I thought about all my orphan dolls I would never see again. I knew my brother would have fun pulling the head off each one. My tears froze on my cheeks. Curved Horn nudged me. As I waited to feel her puncture my side, I felt my tongue loosen. The second it released, I dropped the pails and ran for the porch as fast as lightning.

I have no idea what explanation I gave Mom as to the whereabouts of the water pails. I probably threw off my jacket and snow boots and raced upstairs. The room above the kitchen was my domain. It was home to my dolls and all their paraphernalia. I’m sure I hugged every doll and told them of my near death encounter.