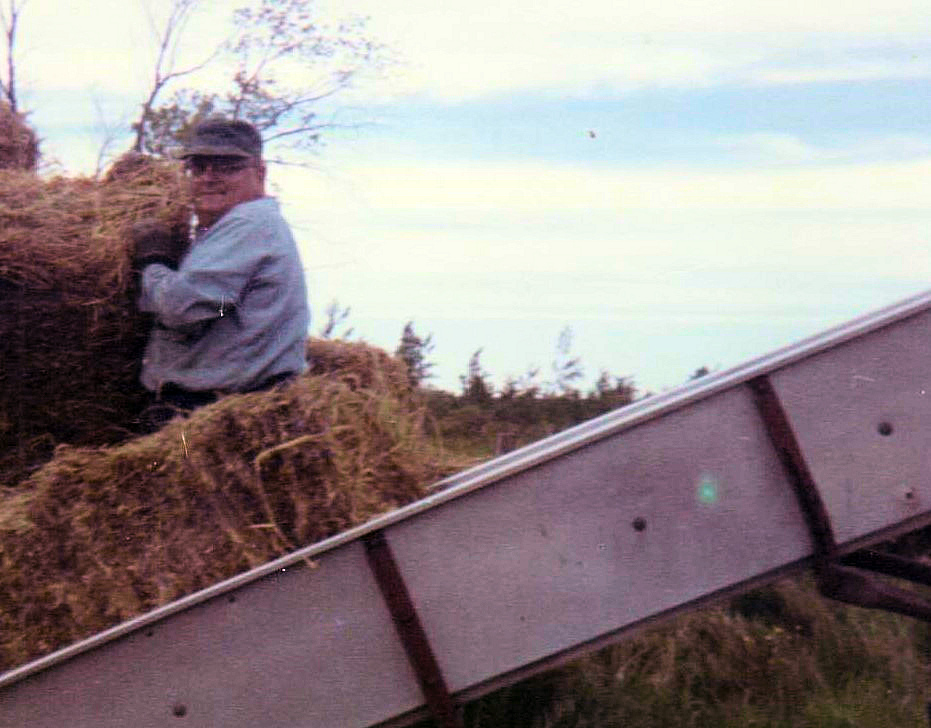 Dad putting up hay in the mow

The fragrant fields are almost quiet now. Soon tractors, rakes, balers, and hay wagons will get a rest and reprieve until once again called into action. Bales of timothy are stacked almost to the barn rafters and thousands more await the arrival of boxed semi-trucks that will carry them from the Upper Peninsula to Lower Michigan, Kentucky, New Orleans, and Florida. Racetrack horses will feed on some of the best hay grown in the country thanks to the work of Tony Jarvie of Jarvinen Farms in Rudyard.

The story of how Tony became a hay farmer began in 1931 when his grandfather, Eino Jarvie from Finland, bought 80 acres seven miles southeast of Rudyard. He and his wife, Goldie, raised 12 children in the house Tony’s father, Delbert, still lives in today. Over the years, more acreage was added by Eino and Delbert. Young Tony took to farming like a duck to water. By the age of five, he was working in the fields and knew he wanted to follow the family tradition. He’s the third generation to work the land that has now increased to almost 1,000 acres.

When I met Tony and his wife, Kim, the first thing I wanted to know was how a hayfield comes about. Is it just grass that grows wild or are the fields seeded? I learned it takes a lot of time and effort to turn a field into a hayfield. In the spring, the fields are plowed, disced, seeded, and dragged. Oats are seeded as a grain crop. They come off the first year. Timothy is added to the grain and becomes the following year’s hay crop. A field will need to be reseeded every three to five years. Because Tony has a lot of acreage, the fields are on a rotation schedule and seeding a different field is done every year. Approximately four bushels of grass seed is required for one acre that will yield two tons of square bales. There was a lot of machinery in and around the hay barn, and it didn’t look like anything my Dad had used when he took off hay in the 1950s. Dad baled less than 50 acres, but Tony runs a large-scale haying business that requires sufficient machinery to get the job done. I recognized tractors, balers, and hay wagons but Tony had to explain what some of the stranger looking things were.

“That machine over there is a crimper,” he said. “It promotes faster and more even drying.” Then he pointed to something that looked like it came out of a science fiction movie. “That’s called a tedder,” he said. “The moving forks aerate the hay and also speed up the drying process. In these parts, haying season is late June to mid-August for timothy. It’s a short window. Good growing weather is warm and dry with some light rains to kick the season into gear. We cut, crimp, tedder, rake, and bale. On the day we bale, a final raking is done mid-morning and baling starts in the early afternoon. It’s crucial to get the hay in before heavy rainfalls. We do cut in October, but it’s our second cutting and doesn’t yield much. It’s grass-like hay used mostly as deer feed.” 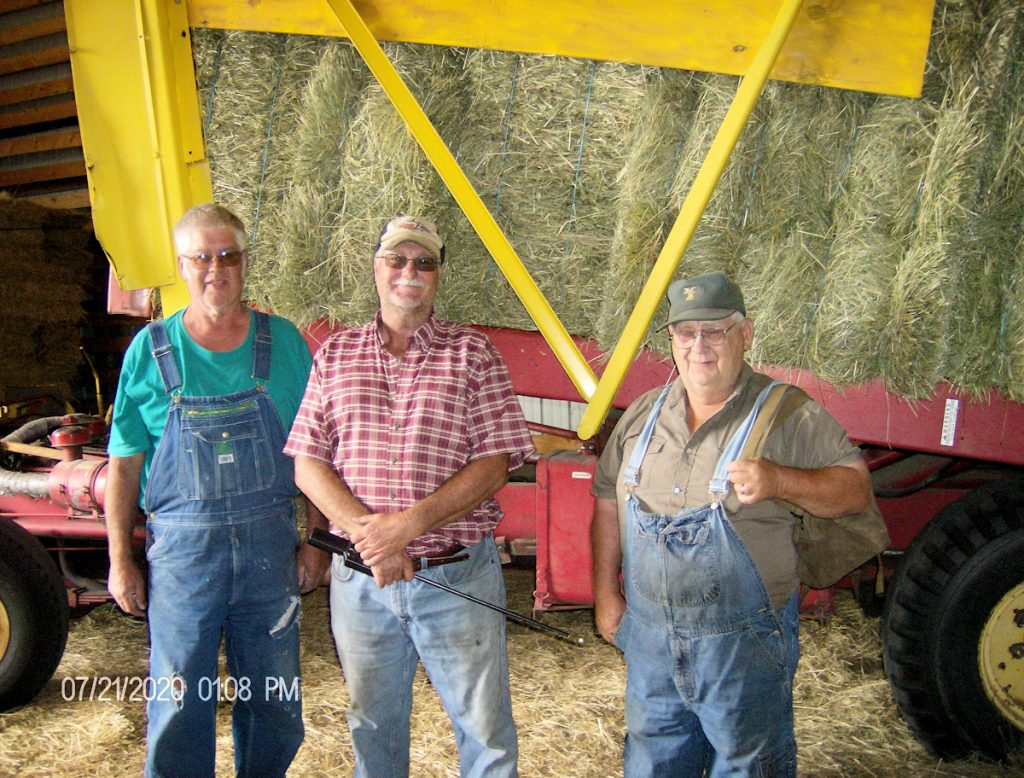 Because the growing season is short, workers spend at least 13 hours a day in the field when the weather is good. Tony’s helpers include Kim, Tony’s cousin, Wayne Jarvie, good friend Arnie Kangas, and A. J. and Sean Ellison. It takes approximately two hours to bale 40 acres of square bales weighing 70 pounds each. The modern bale wagon picks up the bales and stacks them in the barn until the semis come. Each year Tony sells between 20,000-30,000 square bales, more than 300 4’x5’ round bales, and 1,000 silage-wrapped bales. These are the large round bales that often winter in the field and are still good feed for cattle. To a lesser degree, Tony also bales and sells straw.

“A lot has changed since my grandfather’s day,” Tony said. “Haying was done with draft horses and an old hay loader. Hay was put in the mows by way of a team of horses and a pulley system. That’s the way it was done in the 1930s. My Dad bought the family farm in 1960, where I grew up with my two brothers, Matt and Mike. We had chores all year long, but during haying season we spent all day in the fields. Helping with the cutting, raking, and piling bales in the barn kept us busy. Every July we helped Dad put up over 20,000 bales by hand. As early as 1976, Dad’s hay was in demand and was shipped to Kentucky, Tennessee, Georgia, Louisiana, Florida, and closer to home on Mackinac Island. Delbert explained why timothy is preferred over clover. “It’s good roughage,” he said with pride in his voice. “The racetrack guys with shovels appreciate the ease in cleaning up what the horses leave behind. Maybe that’s the reason why my hay was at one time in demand as far away as Saudi Arabia and England where Queen Elizabeth twice bought from me.”

Tony said, “In the 1980s I began purchasing acreage and equipment to begin our own hay farming business. We started out with only a tractor and a few necessary pieces of machinery plus some hay wagons. We put up a ton of hay that way before becoming automated to some degree. It was very labor intensive and was difficult to find anyone willing to work that hard. When our sons, Jess, Joel, and Jordan and our daughter, Alise, were younger, they helped with the haying but since graduating high school they’ve moved on to pursue other careers. Jordan plans on eventually taking over the business, but for now it’s up to us to do the work. If something breaks down, I fix it often with the help of my right-hand man, John Ellison. He’s a mechanic and farmer and I couldn’t do without him.

“There are dangers involved in haying. Every piece of machinery has moving parts so safety is our first priority. Although stacks of hay have fallen on workers and a wagon tongue has hit toes, we haven’t had any major accidents. In that way, as in many others, we’ve been blessed. We live in a beautiful area and are doing what we love. We wouldn’t trade our way of life for anything. I enjoy every minute I’m in the hayfield, driving tractor and baling some of the finest hay grown in the Upper Peninsula.” 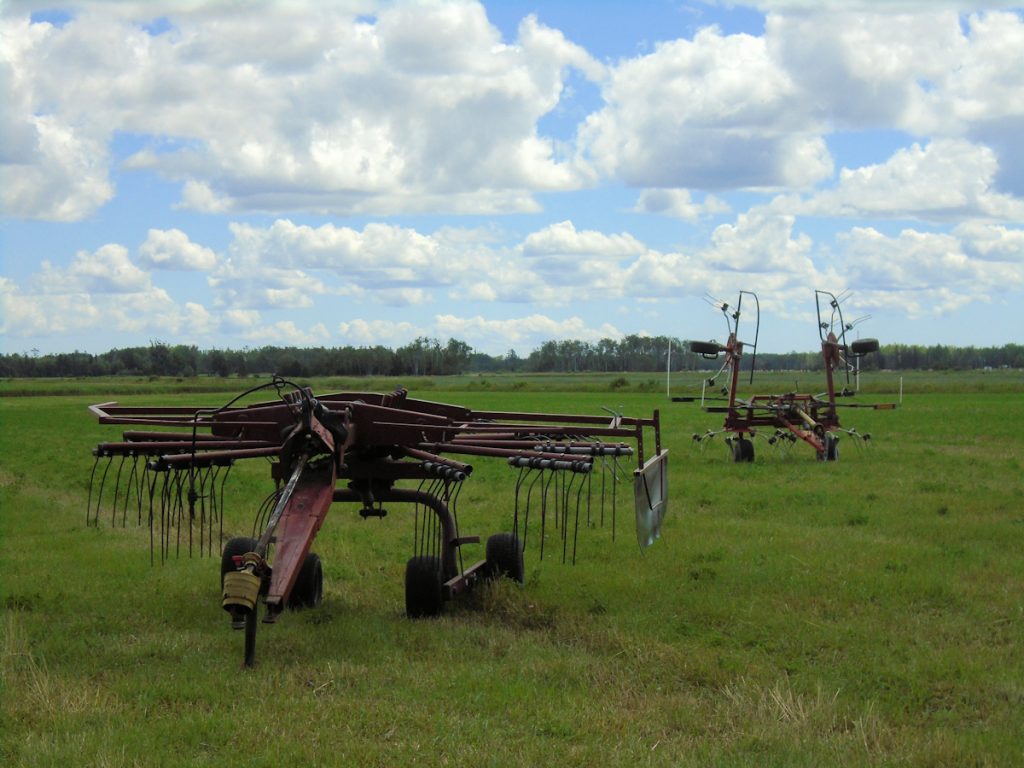