Home Commentary He who has ears, let him hear

He who has ears, let him hear

While watching the Select Committee question people who were directly involved in the Jan. 6 insurrection, that line from the Bible kept repeating in my mind. I thought about the individuals refusing to listen to the witnesses who are testifying under oath. If they have nothing to hide — nothing that might land them in jail — they do not take the Fifth. They are forthright in their responses. Some are even eager to tell why they joined the Oath Keepers and Proud Boys — the folks who wanted to subvert the peaceful transfer of power from Donald Trump to Joe Biden.

Contrary to a popular belief held by many Trump supporters, committee members are not cherry-picking video clips and Twitter posts that make the former president look bad. Members are establishing a factual timeline by “connecting the dots” from Dec. 18 leading to the events of Jan. 6. They’re accomplishing this by asking questions of the people who planned and carried out their mission, which was to stop the counting of Electoral College ballots and send them back to state legislatures for a recount with newly appointed electors. That, in a nutshell, is why these hearings are so crucial and should be watched by every American who has reached the age of reason.

I’ve had conversations with Trump devotees who refuse to acknowledge what’s at stake. They won’t listen to credible witnesses. They believe only what they hear on FOX News and other fanatical right-wing media. How can we be well informed if we only hear one side of a story? It’s like hiring an incompetent attorney who’s too lazy to ask important questions during a deposition — questions like “why did the judge call you and insist that you be a witness?” I have knowledge of a retired probate judge from Sault Ste. Marie who did exactly that. During her deposition, the “defense” attorney refused to ask the woman who was contacted by the judge anything other than her name and address.

Former Trump deputy press secretary Sarah Matthews, left, and former White House aide Cassidy Hutchinson, witnesses before the House Select Committee to Investigate the January 6th Attack on the United States Capitol.
Within five minutes, the deposing was over despite protests from the defendants. It was only natural the jury found for the plaintiff. When facts are withheld or “forgotten,” the result is obvious. Whether it’s a jury trial or an investigation into an insurrection, all pertinent dirt should be dug up and examined and sifted through so truth can be established. Without truth, there is no justice.

Why are we debating whether the storming of the Capitol was merely an “ordinary day of visitors walking through the halls” or a violent attack on the “people’s house?” Why are some Trump followers afraid to watch the historic Select Committee proceedings? Are they afraid of what they might hear if they open their ears? Are they fearful their false prophet will be exposed for the fraud he is? The truth is not always pleasant. It can be ugly, but it should be told. 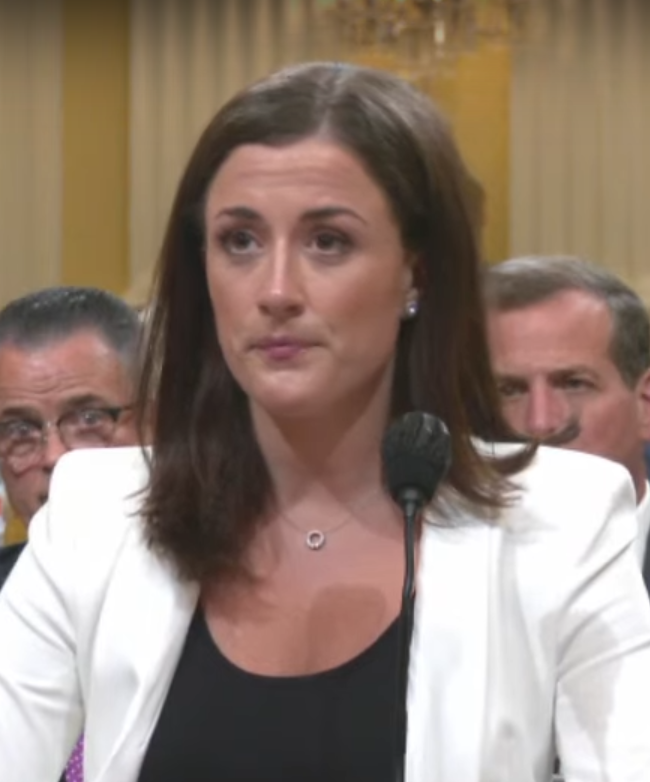 Cassidy Hutchinson gave the Committee some startling information. She didn’t hide behind the Fifth or cower with “I don’t remember” responses when faced with difficult questions. She put herself in jeopardy of being attacked by people who didn’t want to hear her testimony. Her credibility was immediately dismissed as untrustworthy. Was she merely giving her opinion because her devotion to her boss had soured or were her words based upon facts and not just a biased opinion? Will history remember her as a courageous young woman or a liar?

This article originally appeared on The Sault News: Sharon Kennedy: ‘He who has ears, let him hear’