Sixty-five years ago my sister decided to give me a good scare. Jude and I didn’t have much in common. She loved the barn and I was a housecat. She loved Elvis. I liked Faron Young. I read books. Jude subscribed to motion picture magazines. I played with dolls endlessly while she concentrated on board games, outdoor activities, and sleeping. Jude loved to sleep. It wasn’t unusual for her to be in bed when I was dressed and waiting for the school bus.

In those days I could sit on the arm of the couch in the far front room and watch for the yellow monster. We were not a very imaginative family so the room behind the front room was always called the far front room which made sense to us. No trees obscured my view so I could see the bus when it turned the corner about a half-mile away. That gave Jude just enough time to throw on some clothes, grab her lunch, and run down our lane. She was easygoing and always laughed at my seriousness. She saw no reason to give up an hour’s sleep when she could easily get ready in five minutes.

When I was very young, Mom braided my hair and tied ribbons around the rubber bands. Jude’s hair was a thick tangled mess held in place by barrettes. I scrubbed my neck and elbows every morning. Jude splashed water on her face and hands. My clothes were meticulously pressed as were Jude’s, but it was her habit to grab whatever garment was at hand whether it was yesterday’s dress or an outfit headed for the wash.

I was even afraid of a dead fish, but not Jude

Every night before I went to bed, I stacked my books in a neat pile so they would be ready for the next day. Jude hunted for her stuff. My shoes were polished. Hers were scuffed. She saw the funny side of everything, while I saw only gloom. If we didn’t have the same parents, no one would have taken us for sisters.

Jude feared nothing, neither man nor beast, while I feared everything. She knew I was a fraidy cat and took full advantage of my timid nature. It wasn’t unusual for her to hide behind a tree or a door and jump out and scare me. She wasn’t mean. She was merely entertaining herself much the same as when we threw snowballs at our neighbor’s ram, knowing full well he couldn’t get through the fence. In my day, that’s what kids did.

One night Jude hid in our bedroom and waited. She knew I would be along shortly. We had been to the drive-in and watched Frankenstein, a movie that terrified me because it seemed so real. As I reached to pull the string to the overhead light, Jude’s icy cold hand grabbed my arm. I shrieked when she squeezed it. She didn’t say a word as she slowly released her grip.

I pulled the light string, afraid I might see a monster. What I saw was Jude wearing a Halloween mask and reaching her hands towards me. I screamed. She howled with laughter. I started to cry. She removed the mask and said she didn’t mean to scare me that bad. She was just having fun. Her hand was cold because she had soaked it in ice water. Then, uncharacteristically, she hugged me. It took me a long time to forget Frankenstein, but I never forgot Jude’s hug.

From then on, we more or less came to an understanding. For the first time ever, she admitted that maybe it wasn’t such a good idea to scare me in case I had a heart attack. It wouldn’t look too good to Mom and Dad if she scared me to death. It would be hard to explain how a simple “BOO” had killed her sister. She said some of my habits bugged her because she thought I was “perfect.” I don’t remember if she used that exact word, but even at a young age, that was my impression. I was surprised because I thought she was “perfect.” She had lots of friends and was never lonely while I had no friends and was alone all the time, even at school. I wanted to be like her and laugh at everything, but I didn’t know how.

Jude passed away eight years ago. It was a quiet, unexpected death. She had called her grandson and asked him to pick up something from Walmart. About thirty minutes later, Steven opened her bedroom door and found her in that deep sleep from which there is no awaking. She had slipped away without a word to anyone. She was a widow and lived alone so no one was with her when she left this world. But knowing Jude, I could almost hear her say with a chuckle in her voice, “Don’t be afraid, Sharon. Why, there’s nothing to it. Just close your eyes and release your spirit and God will welcome you home.” 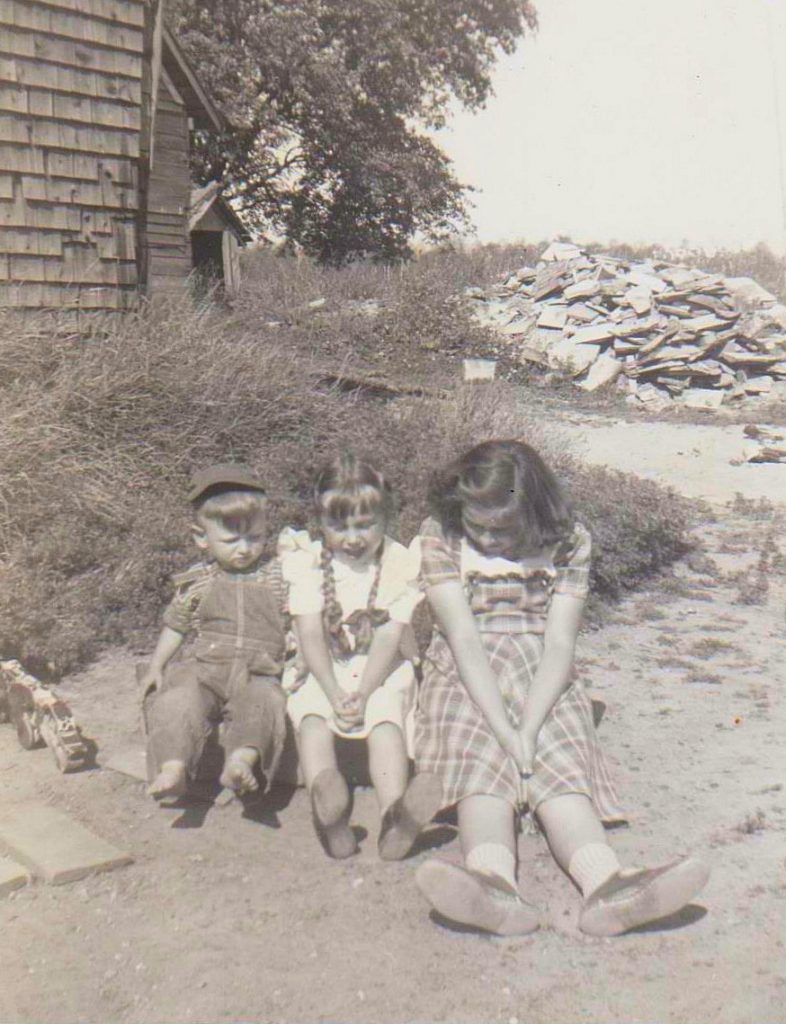 Bucky, Sharon, & Jude comparing the size of our feet, I guess