Home Commentary When your dental floss gets stuck

When your dental floss gets stuck

Sharon Kennedy
Dental floss is a great invention and so are those little plastic sticks we’re supposed to use to scrape plaque from our teeth. But like many inventions that didn’t make it off the inventor’s floor, floss and sticks also have kinks that occasionally must be dealt with. We’ve all experienced the frustration of floss shredding while we use it. Either that or it’s so thick it refuses to release once we’ve managed to get it between our teeth. Some dental floss has the consistency of thread and other brands are more like binder twine. Lucky is the person who happens upon one that does the job without creating more trouble than it’s worth.

I’ll move on to plastic sticks. I’ve yet to find one that isn’t the equivalent of a miniature sword. One end has the potential of drawing blood if we’re not careful. The opposite end has a tendency to get stuck between our teeth. Just the other evening I had to reach for scissors to cut through the stick that was stuck in my mouth. Luckily, my oral cavity is large enough to accommodate both stick and scissors. I opened wide and snipped the stuck stick. Perhaps you’ve never had the opportunity to perform this minor procedure. Consider yourself fortunate. 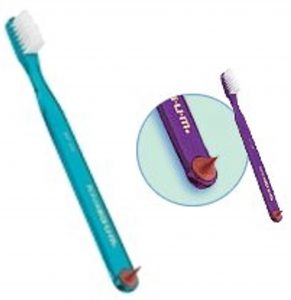 Years ago I used a toothbrush that came with a little rubber point at the end of the handle. I asked Google if it had a name and discovered such low-tech instruments are still available and called “gum stimulators.” It never occurred to me that gums needed stimulating, but I suppose such a maneuver helps prevent periodontal disease. Check out the Sunstar GUM 407. For less than $4 this rubber-tipped, latex-free miracle plastic toothbrush with the amazing little rubber tip is the perfect “stimulator for gingival massage” or so says their ad. Little did I know the toothbrush I used as a kid was capable of such a marvelous feat.

Dental floss that shreds and sharp sticks that draw blood from our gums pale in the face of major problems facing us today, but I thought readers might need a break from the barrage of bad news spewing forth from our electronic devices. I don’t know about you, but I’ve about reached my limit when it comes to hearing of the destruction of Ukraine, the busloads of brown immigrants being dumped in Chicago and New York and the endless crimes of the man who was going to “Make America Great Again.” I’m sick of all of it.

There’s nothing I can do about the war that’s reducing Ukrainian cities to rubble and forcing people to flee their homes. Likewise, I can’t open my tiny living quarters to immigrants who need a place to live, and only a jury who hears the truth is going to land citizen Donald Trump in the slammer. Combine that with forest fires in some parts of the U.S. and droughts in other areas and it’s no wonder the average person wants to bury his/her head in a mindless Netflix show.

As a collective population, we’re overwhelmed. We’re tired. We want realistic gas prices and food that doesn’t cost a fortune. Some of us are grateful the government that was quick to encourage students to borrow money is now offering a smidgeon of relief to them. Taxpayers are furious, yet didn’t blink an eye when it came to spending billions on Bush’s war. Everybody’s mad at everybody. What a pathetic way to live.

— To contact Sharon Kennedy, send her an email atauthorsharonkennedy.com. Kennedy’s latest book, “The SideRoad Kids: Tales from Chippewa County,” is available from her, Amazon, or Audible.