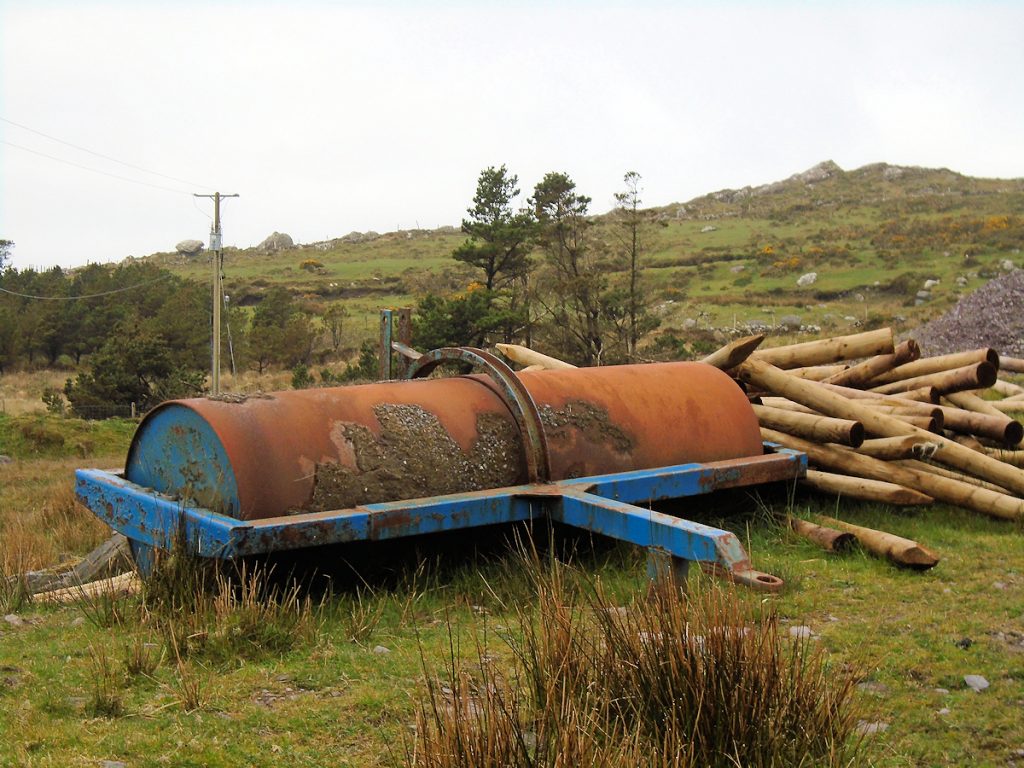 A snow packing roller like dad used (pic. from my Ireland trip)
As January winds blow into February, we continue to hunker down and hold on. Those of us who call Michigan’s Upper Peninsula home know we’re facing eight or more weeks of snow, icy winds, and freezing temperatures. In the old days, nobody flew south. We wintered where we lived and endured heavy snowfalls and icy winds coming off Lake Superior. Men put chains on their car tires as well as their tractors. Dad made sure the enormous roller he used to flatten the snow was ready for months of work. People didn’t think about another round of golf on a Florida green. They turned their attention to facing the endless days of snow and ice.

Freezing weather is much more bearable now than when I was young. I remember our winter preparation. Along with the usual supply of wood for the kitchen stove and bales of hay or straw we banked against the side of the house, we checked the rag bag and picked out the best ones. We also kept an unused butter knife handy. Our farmhouse was old and drafty. Wind found its way around or underneath any door or window crack. Our front door was especially ill-fitting.

It was Mom’s custom to plug the space between the door and the jamb. Each night before she went to bed, she pushed rags into the gap with the aid of a butter knife. Although nothing could deter the cold once the wood in the stove had burned out, the rags did discourage wind from entering the kitchen. Often an old blanket was nailed over the door to further prevent invasion of the elements. Every night until late spring, the butter knife was jammed through the blanket and rags. If it was a particularly cold day, everything stayed in place and we entered and left by the back door.

Our Old House
Winters were not easy in a house with no furnace. Getting up in the morning took real courage. A stovepipe ran from the Jungers oil heater in the downstairs front room to the upstairs hall and made a pathetic attempt to take the chill off the bedrooms. When we were infants, Mom said it wasn’t uncommon for the milk in our bottles to freeze during nights with arctic temperatures. It’s a wonder my siblings and I didn’t perish from the cold, but we were hardy. As teenagers, we wrapped our school clothes around the stovepipe to warm them. We kept our winter boots behind the kitchen stove next to the cat’s basket and we warmed our mittens on the Jungers before venturing outside.

A bitterly cold night meant water in the kitchen pails had a thin layer of ice on them which had to be cracked in the morning before the water was heated on the woodstove so we could wash. Our washstand wasn’t fancy. It was a slab of wood nailed to four birch boughs. A piece of yellow oilcloth covered it and was held in place with thumb tacks. Every morning before school we scrubbed our face, neck, elbows, and hands in the wash dish. Unlike siblings of today, we never fought over who got the bathroom first because there wasn’t one. We had a choice between doing our business in the upstairs commode or the outhouse. We did our primping in front of the white metal medicine cabinet nailed above the washstand.

Until I was 21, I lived much as generations before me. Like my parents, I learned to survive without many frills. We were well acquainted with the Saturday night bath in the galvanized washtub, winter clotheslines strung in the front room, and enduring the cold from October through April. Occasionally the oil stove would go out during the night. Dad would get up and fuss with it until the blue and orange flames jumped to life. What a welcome sight they were.

Our old house stood to the north of the mobile home my parents purchased in the late 1960s. It’s where I live today. The house was taken down 10 years ago. I hadn’t entered it in a long time. The doors and windows were covered with metal roofing to keep neighborhood kids out. Most of the windows had already been broken by youngsters who had no respect for the property of others. Mom knew who threw stones through the windows but didn’t want to create hard feelings with their parents so she said nothing. It bothered her, though, and she rarely went back to the house. It was too painful for her to see the devastation time and vandals had wrought.

With few exceptions, generations that came after me are unacquainted with the old way of life. They can’t imagine a world without modern conveniences. Magazines like “Country Living” paint a glowing picture of country life, but we old-timers know the truth. It was a hard life with no frills. There was no such thing as decorating our homes with kerosene lamps, butter churns, and shelves made of barn wood. These were necessities, not accent pieces. We learned to bake a cake without the aid of anything more than hope. We tip-toed in the kitchen so the cake wouldn’t fall. We rarely passed the woodpile without bringing in an armload of maple or birch. We carried pails of water from the wellhouse to the kitchen and from the wellhouse to the barn when the path was too slippery for the cows. 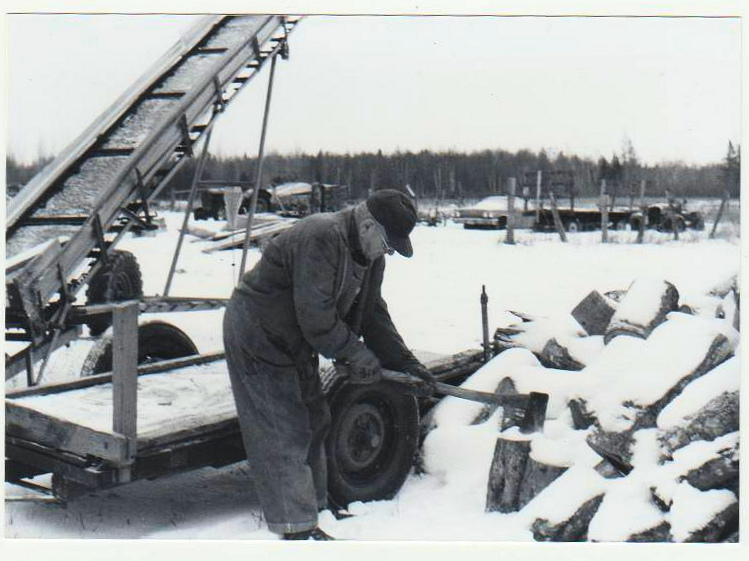 We learned how to navigate a way of life that is gone forever but if the fragile economic bubble bursts and things get really tough, we’ll be okay. For years we’ve been stockpiling rags and we know where to find a sturdy butter knife to keep the wind at bay around our doors and windows. We might have a harder time figuring out how to prepare a meal on a Heartland cook stove, but we won’t starve if we have a chicken in the coop, a Hereford in the field, and a Jersey in the barn. Silly me. Whatever was I thinking? All that belongs to the last century. Now we really are on our own so we better keep our fingers crossed that the next couple months are warmer than the past week.

Batten the hatches, folks, and keep the home fires burning. Not for Johnny, but to eliminate the possibility of freezing to death in your own bed.