Valentine’s Day in the Upper Peninsula 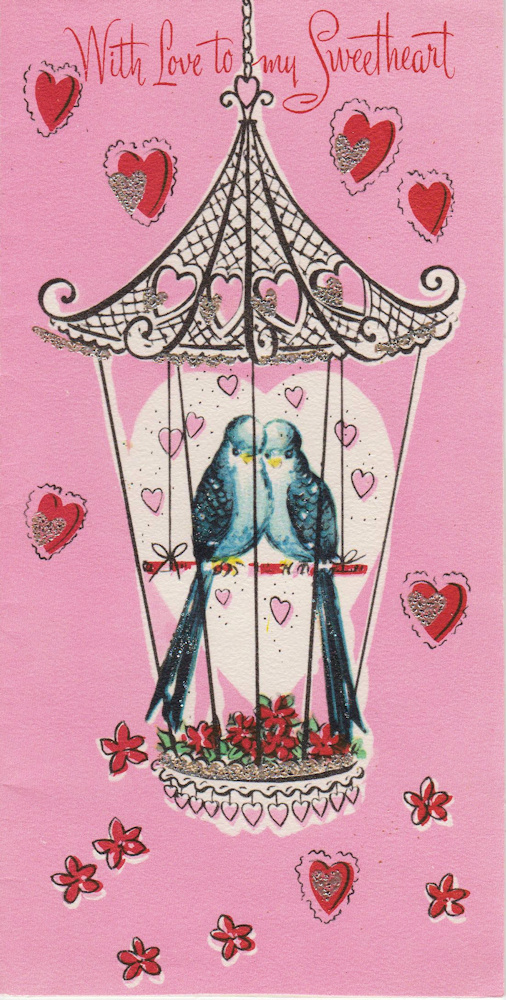 From K.N. my high school beau

The greatest event in February is the day all females look forward to as eagerly as Cupid. Women of all ages anticipate Valentine’s Day for the wonderful surprises it will bring. It’s the perfect day for fellows to “pop the question” and end their carefree bachelor life. If they can’t muster up the courage to permanently shackle themselves to their lady love, they can at least present her with a beautiful heart-shaped box of candy or a lavish bouquet of yellow roses. But here’s a warning to all single chaps who might be reading this. Beware the red rose. In the eyes of your darling, a yellow rose is an automatic invitation for you to hit the road because it symbolizes friendship. That’s all well and good if that’s what she wants, but if she’s looking for an engagement ring, you’ll strike out. The red rose means wedding bells, so choose your rose color wisely.

The idea of sending a valentine on a day set aside to remember a martyred saint has always seemed a bit peculiar to me. As a kid, I saw no connection between a red sucker taped to my card and the shed blood of St. Valentine because there wasn’t any. In the year 496, Pope Galerius the First took the pagan fertility celebration of Lupercalia and turned it into a day to commemorate a worthy saint. According to the Information Highway, aka the Internet, there were three martyred Valentines. The house of my youth was a treasure trove of nostalgia. Mom saved everything, but no papers date back to antiquity. It remains a mystery which saint February 14 honors, and I suppose it really doesn’t matter. After all these years, there isn’t a living soul who cares.

When I moved back to this area in 1984, I raided our old house and laid claim to pictures on the wall, various chairs, end tables, the pie safe, and lots of other things. All items were left in their original position. When Mom moved to this mobile home, she took only what she needed. Nosy trespassers who tramped through the rooms of the deserted house would have thought my parents were simply out for the afternoon.

In my quest to clean the place, I threw away lots of school papers, issues of the Weekly Reader and the American Observer, and boxes of miscellaneous items. I saw no reason to keep yellowed pages of homework from the sixth grade so I put them in the trash. Ditto for typing assignments for Mr. Montague and a fourth grade phonics book I never understood no matter how patiently Mrs. Teague tried to explain it.  Had I known I was going to write a column, I would have saved the items that landed in the burn barrel, but no one can foresee the future. However, I did keep one special box. Some of the valentines you see on this page were placed in that box over 65 years ago.

No Brimley boy ever permanently captured my affection, but neither did any put forth much effort. Their valentines expressed what their heart might have felt, but their mouth couldn’t say. Or maybe the fellow’s mother addressed the card, and the boy had no idea what he was giving. In the old days, valentines came with white envelopes. It wasn’t unusual for a kid to write his name on the back of each valentine while his parent wrote the name of the intended recipient on the envelope. Perhaps the boy asking me to be his valentine had no idea and wondered why I smiled at him so sweetly. Maybe he thought I was off my rocker.

There was one young lad who won my heart at the tender age of seven. We sat at the same table in Miss Penner’s first grade class. As the years passed and tables gave way to desks, this handsome chap sat behind me when we were placed in alphabetical order. Unless, of course, I landed in the last seat in the row. In that case, my admirer was in the first seat of the next row and that’s where he stayed all year. 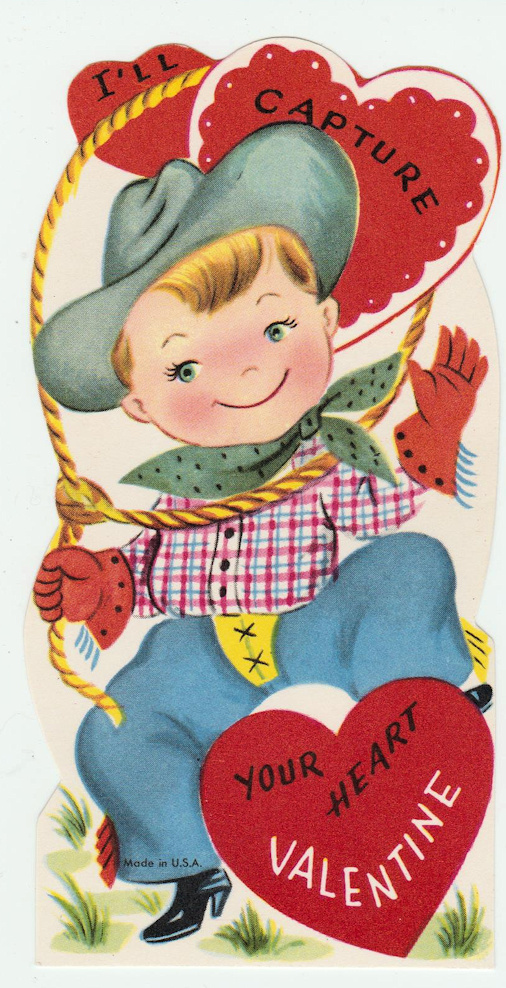 From D. L. the little boy who liked me

From that distance, he was unable to pull my hair or poke me with a pencil eraser, things little boys did to get a girl’s attention in the 1950s. I suppose if a kid did that in today’s schools, the boy would be banished to the principal’s office where a policeman would haul him off to jail. The little girl would be whisked off to the counselor’s office, asked to relive the terrifying experience, and spend the rest of her school years in a recovery program. But when I was young, children were unsophisticated. We didn’t know it was traumatic to have a braid pulled or an elbow pushed while we wrote. If a boy did such things, it meant he liked the girl. The late Scotty Gemmel used to hit girls over the head with a book to show his affection. Nobody thought of it as an act of violence. We thought it was fun and at recess we stood in line awaiting our turn to get our head smacked.

Today’s valentines for children often have themes reflecting popular movies or action heroes. Gone is the image of a little boy dressed as a cowboy throwing a lasso over his special girl. Gone, too, are valentines depicting boys in dungarees and girls in pretty dresses. Years ago, our valentines were as simple as we were. We didn’t depend upon superheroes because they didn’t exist unless you count Roy Rogers, Rin Tin Tin, the Lone Ranger, or Lassie.

Well anyway, here’s hoping your valentine remembers you tomorrow with candy, flowers, a fancy card, and a nice dinner. If he forgets this special day, give him a good poke with a pencil eraser. Such an act might beat him into submission if not actually to the altar. That might take Cupid’s bow and arrow, George Washington’s hatchet, or a posthumous Proclamation from President Lincoln.