Home Shipping The Words of a Sailor

The Words of a Sailor 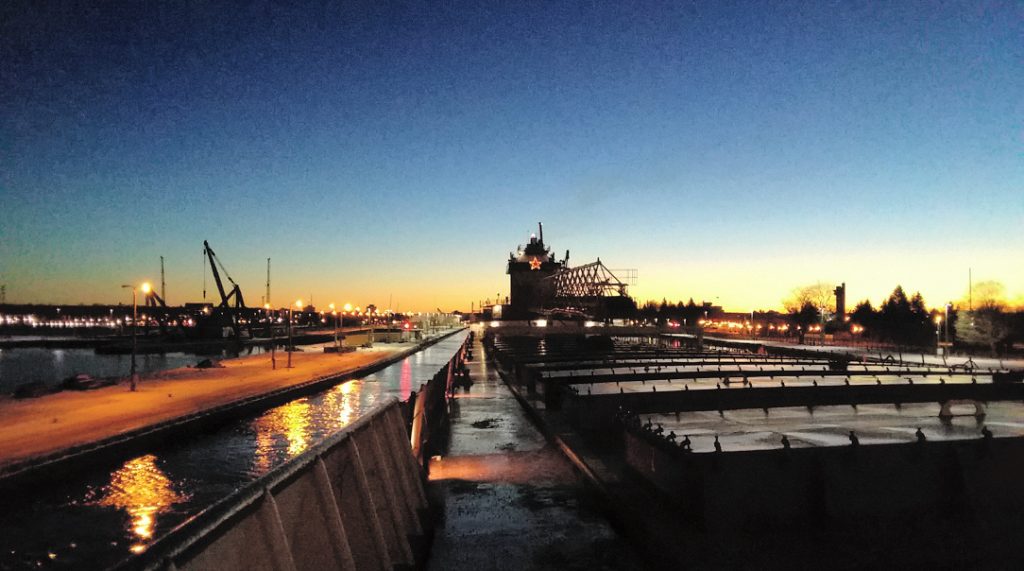 “A weathered hardhat, a pair of line-worn gloves, paint speckled boots, and a discharge. That’s a wrap for the season. It was a privilege to work alongside some of the best professionals on the lakes this season aboard the M/V Joe Block and  SS Wilfred Sykes. Time for some time off. Until next season, 3L-2S!!”

These are the words of Bob Haworth taken from his Facebook post of January 27, 2019 as the Sykes went into Sturgeon Bay for winter layup. I’ve never met Bob, but I was intrigued by his posts and photographs. Some of the quotes I read he attributed to songs or poems written by men who felt the call of the sea but had never boarded a ship. Some, perhaps, were written by sailors, and some were penned by Bob. The amazing photographs on these pages were taken by him during his time on the Block and Sykes.

Although only 27 years old at the time, it was obvious from his posts that he had the heart of a true sailor. My brother sailed in the 1970s when the lakes teemed with ships. He told me that when a fellow isn’t working he has time to sleep, read, write letters home, and contemplate his life. If he uses his time well, he’ll become a better man as he starts to understand what makes him tick. What touched me about Bob’s posts was the honesty of his writing. I contacted him and asked if I could share his story with my readers. What follows are his words. His articulate responses didn’t need much editing, so I’ll step out of the way as you experience the life of a sailor as seen through his eyes. 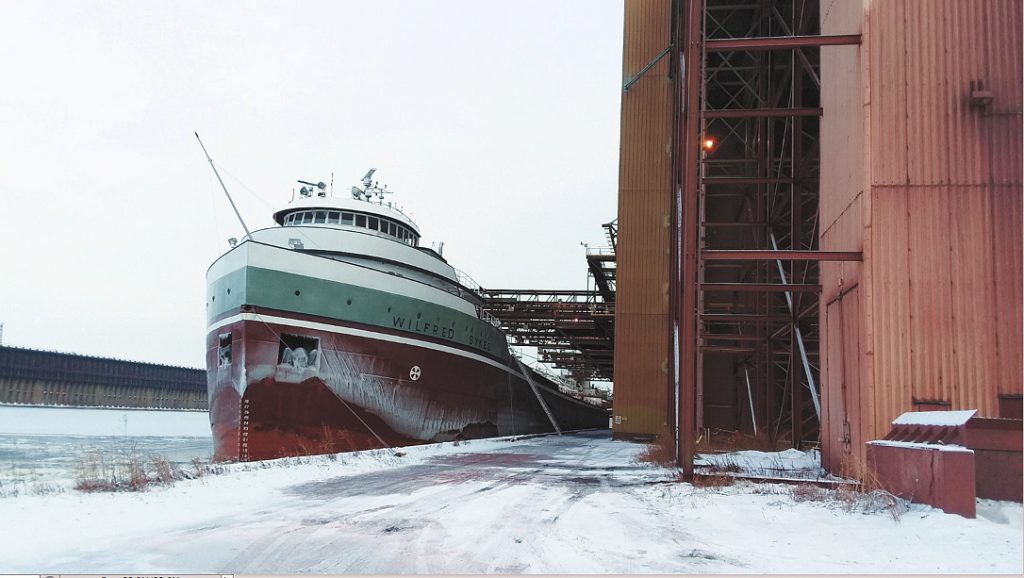 “My hometown is Lewiston, MI. When I was a youngster, my parents often visited Sault Ste. Marie just to watch the freighters as they locked through. At five years old, I thought the boats were neat. Eventually I learned their names and their companies by their stack markings. When I graduated high school, I applied for my MMD and TWIC cards, both of which are mandatory to be considered for work on a freighter. My cousin encouraged me to seek work as a sailor. The first ship I was ever on was the Arthur M. Anderson, but once I was hired by Central Marine Logistics (CML), I now sail on their ships, the Joseph L. Block or Wilfred Sykes. I’ve been sailing with CML for three years as a deckhand but recently I became an AB which means I’m qualified for anything an unlicensed deck person can do. That includes standing watch as a lookout, running the deck machinery, and being a wheelsman.

“In March of each year, the captain and crew are in Sturgeon Bay for the spring meeting just prior to fitout. This is when the new season is reviewed, improved safety procedures are gone over, and the company gives everyone a chance to voice their concerns about anything. It’s a family atmosphere with food and lodging provided by CML. Fitout is a busy time. We’re back from the winter months and ready to go. Deckhands are busy stowing the lines and cables used to tie up the boat at layup. We also perform drills required by the Coast Guard.

“What I like most about sailing is the adventure. Not every day is the same. Duties aboard ship become routine, but no two days are alike. The weather, the boat, and the operation may not go as we had hoped. A sailor needs the ability to adapt to any situation. 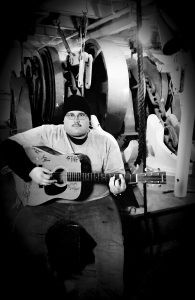 Bob on guitar in the windlass (anchor) room

“Life on the lakes can be challenging, especially being away from home, but if a person is up for it, it’s worthwhile. For a single guy like me, it’s easier. Someday far in the future I might have to make the decision to keep sailing or try life on the beach, but for now sailing suits me and I suit sailing. I have time to indulge in my three main vices: photography, music, and reading. When I board the ship, my guitar comes with me. I’ve been playing guitar since I was five. Music is a great stress reliever, as is reading. It’s not uncommon for me to read seven books in three months. I also try my hand at writing.

“Sometimes I post things on Facebook that have a direct connection to the way I feel about a certain subject impacting my life. Sometimes I just post things related to my job because I know certain people enjoy reading about it. When I post about my work, it might seem that I romanticize it, but in reality there’s very little romance about working on the water. Sailors are gone from home a lot of the time and virtually married to the job. We go to bed at work and wake up at work. We’re confined to a space for 24 hours a day, for days on end. The job is half work, half mental. Anyone can do it as an unlicensed sailor, but sailing demands the mental ability to withstand living in a space 728’ long and 78’ wide and the ability to get along with the crew.

“When sailors say the crew is ‘family’ it’s true. Sometimes we gripe and complain to each other about each other, but when it’s time to work, we get the job done in a professional manner. It doesn’t matter what the weather is or what time of day or night it is. When we’re making a dock or a lock, deckhands have to be out and ready to work. I’ve seen lots of dark nights from the deck in all sorts of weather. It’s a tough job that demands we do our best. The hardest part of being a deckhand comes in winter because nothing compares to winter sailing.

“First comes the call out. We’re making the dock at 3:00 a.m. We awaken from a sound sleep after working outside de-icing the boat until 4:30 p.m. the previous day. There’s a KNOCK KNOCK ‘0130 to 0200’ which means we have 30 minutes to wake up, use the facilities, and put on all our winter gear. It’s best to step outside so we don’t over or under dress.

“At 0200, we’re half-awake as we step on deck. The wind is blowing at 30 mph and the static air temp is -15F. We turn the winches on and take the chock covers off. The chocks are what the mooring cables pass through after they come off the winch and then down to the dock. We open the winch boxes and get the wires out. We start the hoist and slew pumps for the boom to warm them up. Don’t forget to start up the hatch crane so it can warm up too. We grab the heaving lines. It’s our lucky day if overnight it snowed and there’s a foot of the white stuff on the deck.

“Then it’s time to get the hatches unclamped. If one guy is on a forward ender, that’s 72 clamps a hatch. Stern enders are 22 clamps a hatch. Like everything else, they’re made of steel and don’t want to move. By now we’re awake. Up forward, we’re knocking ice off the landing chair boom. Forward enders aren’t bad because the pilothouse blocks the spray. Nevertheless, when sending guys over the side to the dock, the equipment needs to be as ice free as possible.

“Now we’re making the dock. The maneuver that normally takes a half-hour in good weather is now a two hour ordeal due to the ice wedging between the dock and shipside. When there’s enough room, a deckhand is swung over on the chair. Hopefully the footing is good and he doesn’t land on his backside. Once safely landed, it’s time to tie up the boat. Picture being dressed in 10 pounds of weather gear, pulling a steel wire on ice and snow, and you’ll get an idea of what it’s like. The more the wire pays out, the more it weighs.

“Once the ship is tied up, it’s time to open the hatches. Of course, they’re frozen. One guy gets the Rosebudd heater and one gets a pry bar. One by one we open the frozen hatches. If we’re loading, we might have to wait for the dock to finish charging/loading the pockets on the ore docks so we can load. This can take up to four hours. Ore freezes in the pockets causing further delays. Belts shut down. Equipment breaks due to the cold. When it comes time to shift the boat so the loading rig can load another hatch, it’s frozen in place because of the long wait so a tug is called in for relief. We start loading again, and we’re finally on our way after a 28 hour load which usually takes 10 hours.

“Sailing on the lakes is one thing, but when we’re in the rivers it’s ice, baby, ice and more ice. In winter, it takes a day and a half to two days to make what would normally be a 10 hour transit. We wait on traffic and ice breakers. We can’t sleep at night when the boat grinds her way through ice. It’s really rough on the forward end. The deck crew sleeps up forward and it’s so gawd awful loud as the boat smashes through the ice, we have to shout to talk. We can’t hear anything but the grinding of ice as the ship moves forward. On the aft end the boat shakes like mad. Trips take longer, delays take longer, everyone’s tired, easily ticked off, and itching to go home. We spend eight hours removing four inches of ice from the deck only to have another eight inches there the following day. We finish our last load and eagerly anticipate the shipyard when we hear the three little words every sailor on the lakes dreads: One more trip! 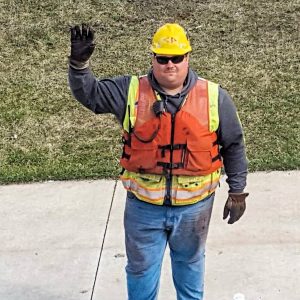 Bob Haworth at the Soo Locks. Photo by Bart Nielsen

“We do it because that’s our job and that’s what we’re paid to do. There is no ‘norm’ in the shipping business. We think we have something figured out but before we can think it over, it’s changed two minutes later. There is no glamour or romance involved in sailing in the winter or in this job period, but there are a few things that happen once in a while that make me stop and realize ‘I am here.’

“Lake Superior is wide open and awesome. There are some places where you can go hours without seeing land. Running the north shore in winter is amazing. Seeing the hills and rugged coastline makes me aware I am truly in God’s country. It’s moments like these when I’m thankful I get to do what I’ve wanted to do since I was a kid. I get to sail on the most beautiful waters in the world with some of the best captains and crew on the Great Lakes.”

I hope you’ve enjoyed reading Bob’s story. He’s an impressive young man. I have no doubt the coming years hold many adventures for him as a successful AB who might one day be a respected captain of his own ship.