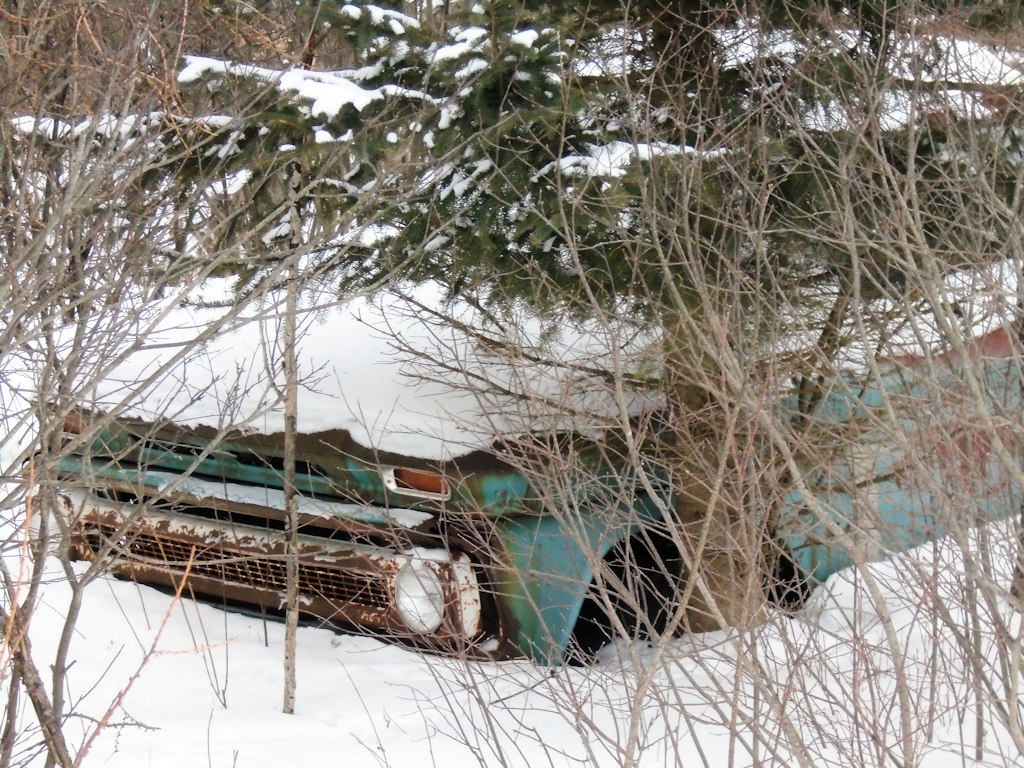 March winds are almost here. Soon they’ll blow off Lake Superior as strong and secretive forces, entities unto themselves that remind us winter does not want to let go. Today I felt their cold fingers encircle me. I watched as they lifted loose snow and swirled it from one tree to the next. It was an angry wind that blew from the north and threatened to chill me to the marrow of my bones. I was glad I had chosen my heavy winter jacket and woolen hat and gloves.

I put on my snowshoes and headed for the open field and the woods behind it. The temperature was mild, but when a strong gust hit me, I felt the full force of the wind and turned to face it. The fresh air reddened my cheeks and stung my eyes until they teared. I stood still for a few moments before I came to my senses. Only a deranged woman would let the wind pummel her. I walked to the edge of the woods where Dad’s old truck was. Years ago he had hitched it to his tractor and pulled it to its final resting place. At that time, there were no trees there but over the course of many decades, nature had reclaimed its own.

There was too much brush to snowshoe around the truck, but I took a few pictures of the driver’s side. I don’t know why Dad hadn’t traded it in when he bought another vehicle, but he often preferred to tow a car or truck to the field instead of selling it. He was a good mechanic and perhaps felt he could use some of the parts as scrap, but I’m only guessing. I don’t know the true answer. Neither do I know the year the truck was put out to pasture, probably sometime in the 1970s when I lived downstate. All the windows were intact as was the windshield. Obviously, no neighbor kid had ventured into our field and stoned the windows as they had our empty house. 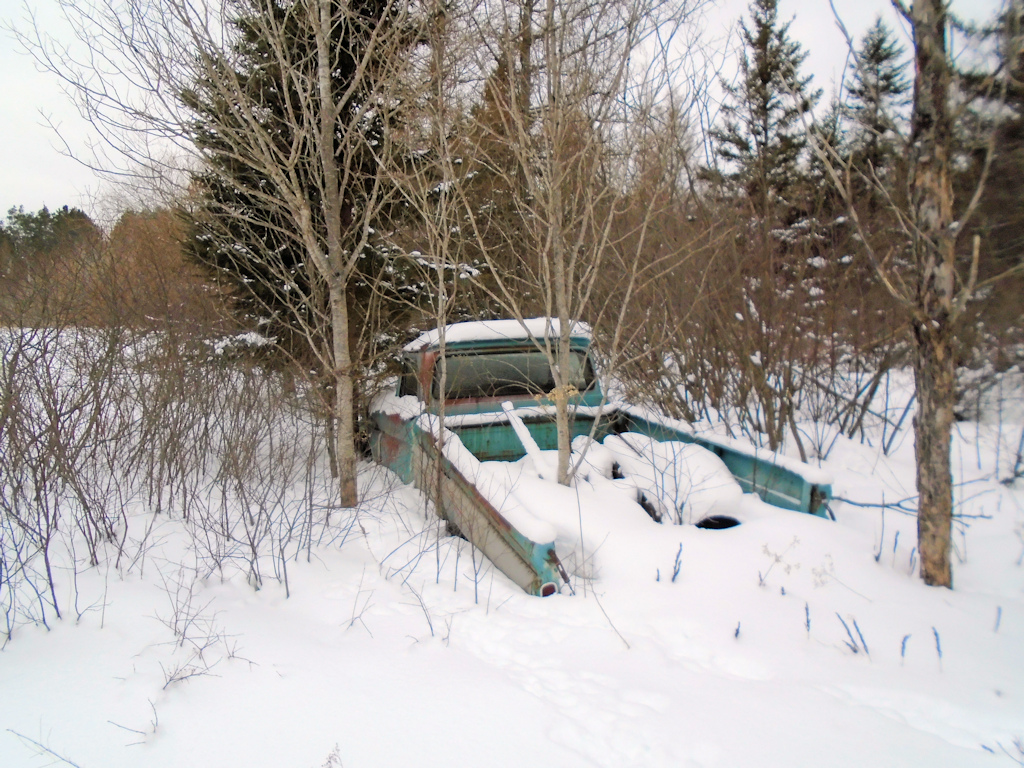 Mom always talked about the winds of March. She saw something unfriendly, almost menacing in them. Winter winds were different. We expected them to be cold, harsh, and unforgiving. We dressed accordingly, kept the fire going in the kitchen wood stove, and prayed the stovepipes didn’t burn out during the night. Frigid temperatures kept the wind at bay, but when February gave way to March, nothing could tame the blustery air around us. The same feelings Mom imparted to me as a child remain with me today.

Like my mother, I think of March winds as sinister. They hold secrets. They know what’s hidden underneath the layers of remaining snow. They know which animals didn’t survive the winter and where the snow buried their carcasses. Perhaps that’s why the gales blow hard and unforgiving. They don’t want to relinquish their secrets. They want to chase us back to the comfort of our warm rooms while they roam unchecked on the land we call our own.

I’ve always respected strong winds, but I never feared them until years ago when they brought down trees too weak or ancient to withstand their power. I remember a poplar tree that was over 100 years old. It towered above the house of my childhood and seemed to go on forever. It was a favorite stop for crows as they scouted the ground, looking for their prey. There were two big trees in our front yard. One was a maple and the other was that poplar.

I lived in the Soo in 1985, and my daughter and I usually spent weekends with Mom. It was a Saturday morning when I drove by the old house and immediately noticed something was missing. The tree of my youth was gone. A wild and furious wind had brought it down during the night. It must have made a mighty sound as it gave way but against the howl of nature, nobody heard it uproot. The morning was calm and sunny. When I told Mom the poplar was gone, she couldn’t believe it. We tramped over to where it lay, a giant corpse facing north, its branches crushed and broken and scattered across the field.

If you’ve ever seen a gigantic tree felled with no other trees to help break its descent, you know what that poplar looked like. It was the most amazing sight I’d ever seen and also the most terrifying. It seemed to stretch on endlessly. Dad had passed away two years prior. He had always hitched his sickle bar rake to his tractor and cut the fields around the house. Now they’re a tangled web of spruce and tamaracks, but back then the fields were only grass. Mom was grateful the hand of God had guided the poplar away from the house. It was so close, one raw gust would have sent it crashing through the roof. It would have taken the building down with it, and that was a sight she couldn’t have endured—seeing the contents of her former life scattered across the field. We didn’t stay long looking at the strange sight before us.

Although photography was one of my hobbies, I never took a picture of that tree. Where it fell was where it stayed, undisturbed. Eventually grass and saplings grew tall around it and after many years it decayed and returned to the earth. It’s only a memory now, but when strong winds blow over the land, I’m reminded of their power and their secrets. I wonder what Dad’s truck could tell of the sights it has seen and the critters that have claimed it as their home. I’ll never know, but I’m willing to bet the March winds off Lake Superior could tell many strange stories that are hidden from us mortals. 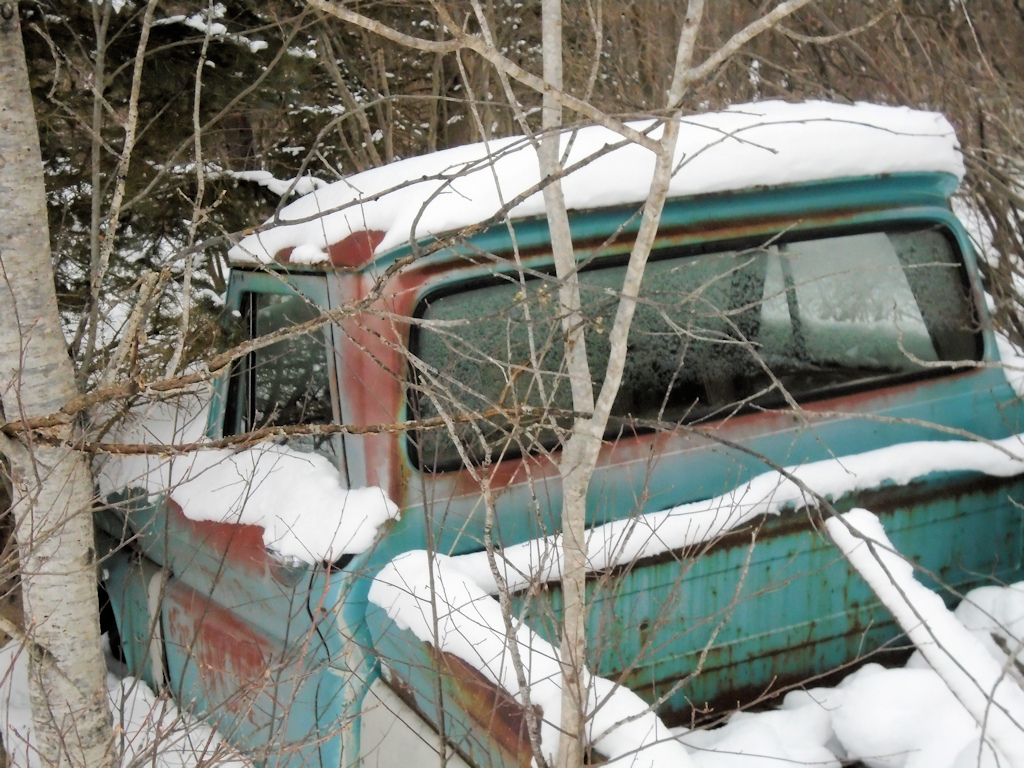