Home Reminiscences A Shamrock, a Shillelagh, and a Stout

A Shamrock, a Shillelagh, and a Stout 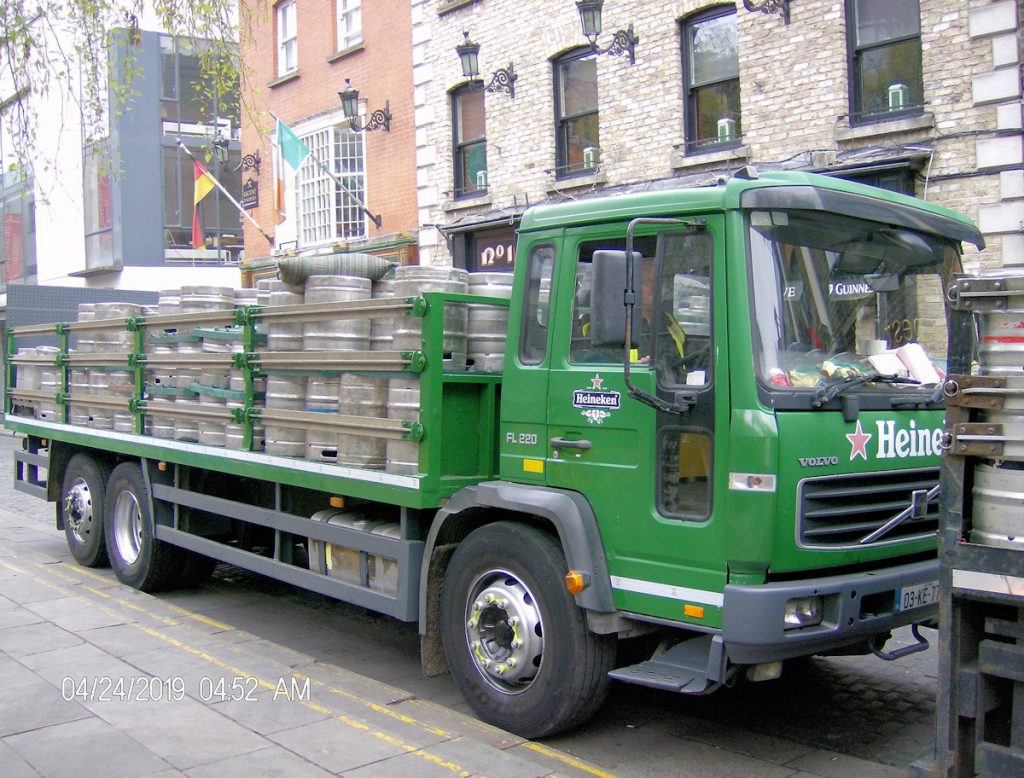 Every St. Patrick’s Day, Dad drilled into us kids the importance of wearing something green and proudly pinning a shamrock to our clothing. March 17 was the only day of the year orange was an absolutely forbidden color for it was a reminder of the old troubles between Catholics and Protestants. The animosity was so great, I remember Gram telling us the Catholic Church was burned to the ground in the dry town of Pickford, 25 miles south of Brimley, Michigan. I have no idea if the story is true so don’t get your hackles up if it’s as false as a set of choppers soaking in a glass on your nightstand.

Although most of the traditions of my youth have gone by the wayside, I continue to honor Dad’s request. Even if I stay home and no one sees me, I’ll wear something green this Thursday. However, last summer I sold the shillelagh I bought Dad when I lived in Detroit, and the last time I raised a glass of stout was probably in 1977. The Old Shillelagh Pub in Greektown on Monroe Street was the place to be on St. Patrick’s Day. Sometimes things got a little rowdy. I remember pouring a glass of beer down the front of a waitress’s blouse. Do I recall the circumstances? Definitely, but my lips are sealed, and seven years ago my then-partner, Yorgo, went to that great green tavern in the sky so you’re not likely to hear the truth from him.

Yorgo was Greek and had never kissed the Blarney Stone, consumed Mulligan stew, or tasted fresh soda bread baked in a traditional bastible, but it didn’t matter. In the Old Shillelagh on St. Paddy’s Day he was more Irish than a leprechaun. Although he was a gifted illustrator, he had no musical ability but he sang along to “Danny Boy” and the “Rose of Tralee” until tears rolled down his cheeks and his feigned brogue got as thick as his tongue. As the evening wore on and the crowd got rowdier, he marched in place to “A Nation Once Again,” mourned dear “Molly Malone,” and cheered “The Wild Rover.” I must admit neither of us cared much for traditional Irish instruments or Celtic folksongs sung in the ancient language. We preferred familiar Irish-American songs sung by visiting performers like Pat’s People and the Irish Rovers.

But overlooking the general dislike of the high-pitched sound of the tin whistle and the booming bodhram frame drum, in the Old Shillelagh everybody loved St. Patrick’s Day. It was the only acceptable time when a man could make a fool of himself by dancing a jig on the bar and the proprietor never complained. Quite the opposite. Pub patrons were expected to drink until their eyes glazed over, their speech slurred, and fellows proposed marriage to the nearest waitress, single or otherwise. If anyone was still sober by the 18th he had proven he was no Irishman and might as well fold his merino wool sweater, shove it back in a drawer, and try again next year.

In the office where I worked, people who rarely noticed each other became friends on March 17. Girls who wouldn’t be caught dead wearing anything green decked themselves out in various shades of clothing as bright as freshly cut sod. Even the most conservative lawyer wore a tie with a Celtic knot design or pinned a shamrock to his lapel. For one day, our dignified legal office on the 21st floor of a downtown Detroit building became a place of merriment and goodwill. A senior partner would arrange a catered lunch of corned beef sandwiches and green sugar cookies. Once the workday ended, the mad dash to local drinking establishments was on. Along with Irish music, Guinness stout, Harp lager, and Jameson whiskey poured forth like a river. With the aid of these beverages, there wasn’t a dry throat or eye in the place by midnight. 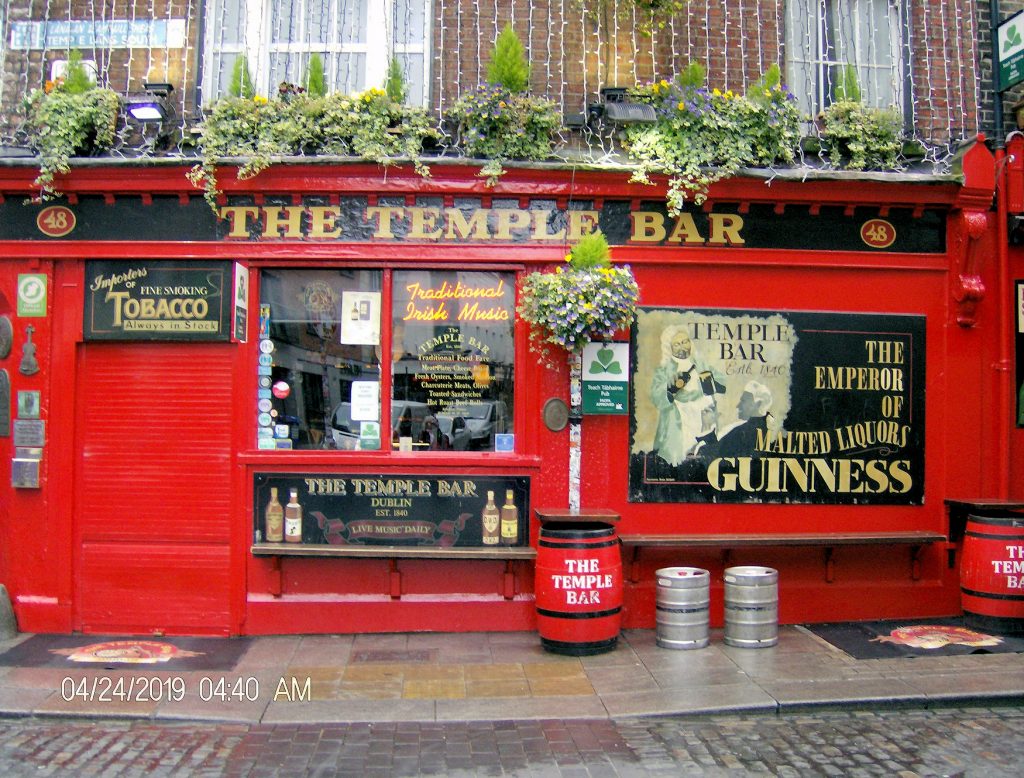 The Temple Bar in Dublin

Oh, the joy of being Irish. The bliss of melancholy and storytelling, the delight in a jig or reel, and the sheer abandon of inhibitions as voices join together in praise of a country most have never seen. For one beautiful day, we share a common heritage and click our heels as high as a Riverdance performer. The Finns celebrate St. Urho’s Day on March 16. St. Lucia’s Day on December 13 is meaningful to Norway, Sweden, and parts of Finland. A quick Google search yields lots of days salute various saints, but none as legendary as Patrick. So don’t hesitate to raise a glass in remembrance of the revered Apostle of Ireland, the old snake charmer himself.

There’s something bordering on the magical when it comes to St. Patrick’s Day. The endless beverages, the scrappy brawls, the quick wit, droll humor, red hair, and fiery temper epitomize the Irish. If the stereotype doesn’t come close to reality, nobody cares. Be merry this Thursday and recall an Irish proverb as you go on your way. “For the test of the heart is trouble and it always comes with years. And the smile that is worth the praises of earth is the smile that shines through the tears.”

And I’ll leave you with one more Irish saying, “May the saddest day of your future be no worse than the happiest day of your past.” Have a grand St. Patrick’s Day! 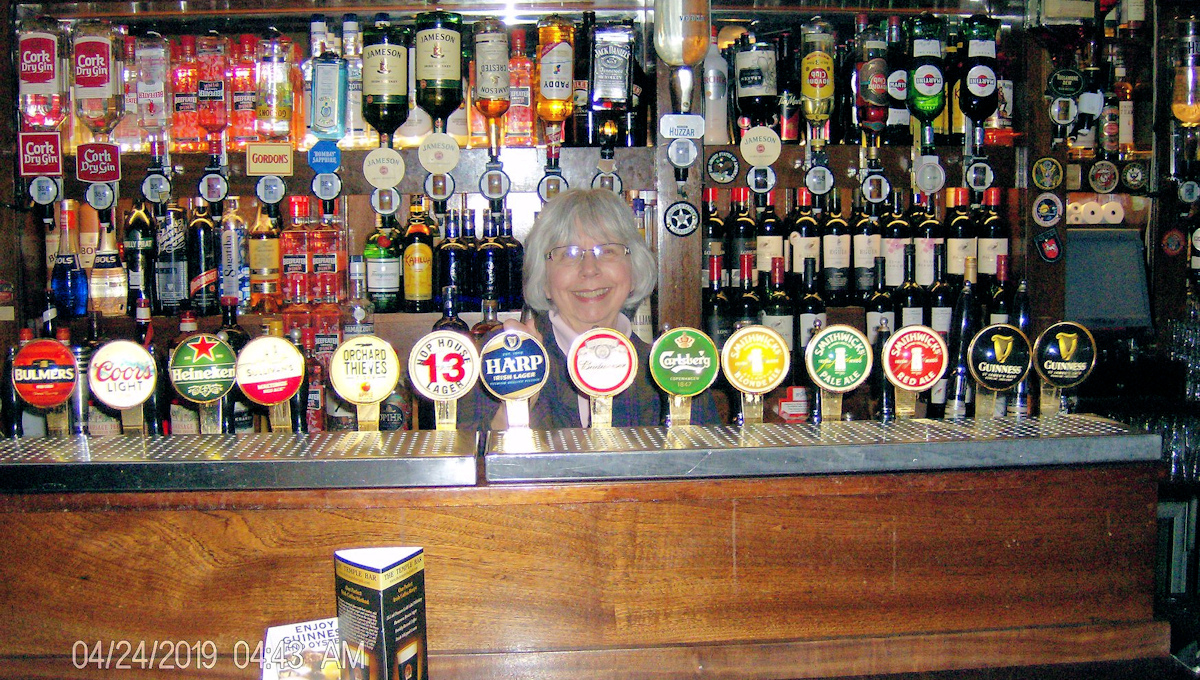 Sharon behind the bar at the Temple Bar in Dublin