When you can’t find what you’re looking for, check the jumbled mess in your kitchen junk drawer. We all have one, that special drawer where we throw things when we don’t know where else to put them. Mine is stuffed with assorted lids, rubber bands, twisty ties, nails, thumbtacks, tape measures, various screwdrivers, scissors, and a whole lot of other junk. Everything was connected by a ball of string that managed to tangle itself around the entire lot. One day I got out the scissors and cut things loose.

If you’re like me, some of your stash is perfectly useless, but you don’t have the heart to throw it out. I keep the metal bacon press Mom bought years ago to prevent bacon from curling in the pan. Mind you, I haven’t fried bacon in 17 years and have no intention of ever frying it again, but that lid brings fond memories of Mom so it stays.

Ditto for hundreds of red rubber bands she saved and wrapped around an empty tomato paste can. Although I trashed her supply of square plastic ties, I kept the sharp twisty ones covered with paper. They have a tendency to fall apart and jab my fingers as I rummage through the drawer, but I won’t throw them out because I never know when I’ll need one.

Once a year, I dump the contents of the drawer onto the kitchen table and attempt to sort through all the junk. Sometimes I find what I was looking for, but I find it too late. For instance, the birthday candles I needed six months ago magically appeared two days ago. The spare Christmas bulbs showed up last July when I hunted for them in December. I found the missing shoelace to the pair of winter boots I threw out two years ago. The button to my favorite blouse turned up when the blouse was in the rag bag. And so it goes. 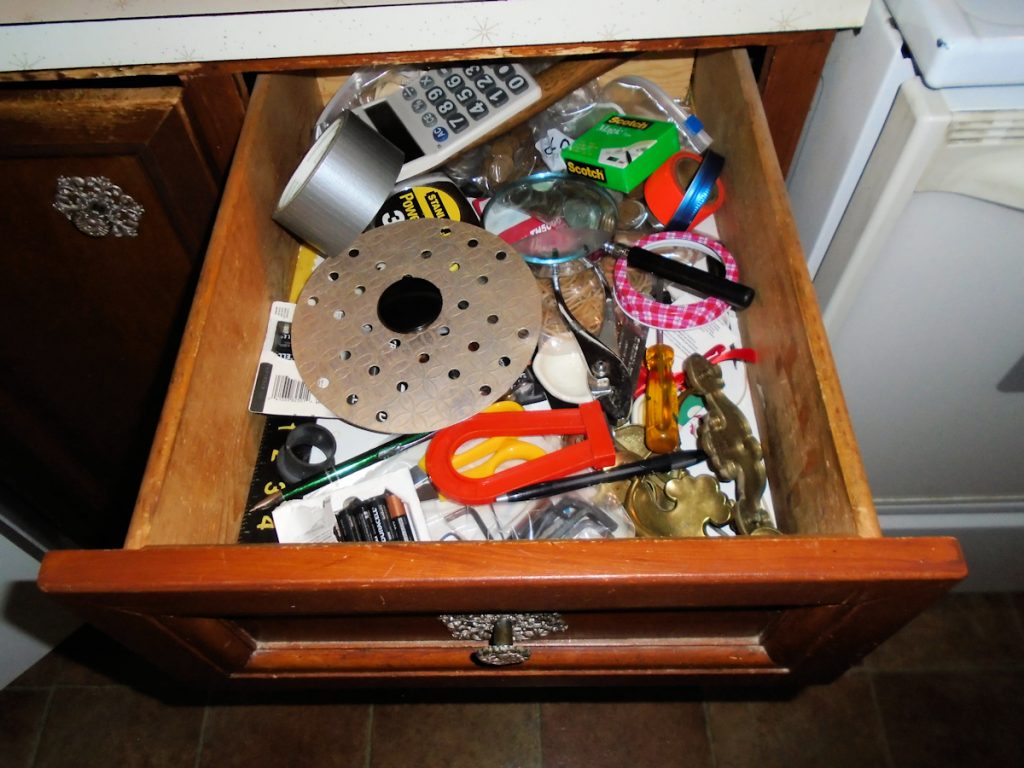 This morning I was looking for my cake testing spear this when I came across a red horseshoe magnet I hadn’t seen in years. Mom collected magnets. As she aged, her eyesight wasn’t the best, but she liked to patch whatever article of clothing was still worth salvaging. Occasionally she dropped a needle or straight pin and the best way to find it was with a magnet. Over the years, she acquired quite a collection of magnets in various shapes, colors, and sizes. The red horseshoe is the only one remaining.

Further rummaging in the drawer turned up Dad’s hoard of Stroh’s bottle openers. I’m sure fellows remember the years prior to twist off caps when the only way to open that icy cold brew was with a well worn metal, made in the U.S.A., “Not for Resale” bottle opener compliments of the Stroh’s company. Those nifty gadgets predated aluminum cans with pull tabs as well as the twisty caps of bottles and were as essential to a beer drinker as a pocket jackknife was to a whittler.

A small Pfeiffer beer opener was lodged among the others. It’s a little rusty, but I can still read the inscription so proudly displayed, “The Real Beer from the Great Lakes Country.” Next to it was an Old Milwaukee opener promising “Genuine Draft Beer.” Heileman’s Old Style Lager “Wisconsin’s Finest Beer” somehow found its way into the drawer. Rounding out the group of openers were three Schlitz, two Hamm’s, and one Goebel’s. You won’t see most of these openers in the drawer. Last year I gave them to a friend who collects such relics.

By far the most populous items were the keys strung together with a sturdy piece of binder twine. I imagine Mom had a free hour one snowy afternoon and gathered all the miscellaneous keys she could find, and she found plenty. Although the doors they opened were long forgotten, the keys were kept because they were ornately beautiful. All the ones I found were manufactured in the United States. Some by the Yale Company, others bear names like Weiser, Harloc, Star, Taylor, and Chicago Lock Company.

What would we do without our junk drawers? Where would we stash all the stuff important only for the stories they tell and the memories they bring to mind? I don’t know if modern households have a special drawer designated for “junk” but I hope so, and I hope it holds more than condiments from fast food restaurants. Maybe the stories associated with a plastic squeeze-tube of ketchup or mustard are memorable. Maybe the hot sauce from Taco Bell, the sour cream from Wendy’s, the soy sauce from a Chinese take-out, and the plastic forks from Arby’s remind folks of happy hours spent with loved ones. I’ll never know.

What I do know is nobody can remember all the stuff crammed into that drawer, so don’t be too hard on yourself when you can’t find what you’re looking for. And if your spouse wants to know the whereabouts of anything, just point to the junk drawer. Sooner or later he will find that special fishing lure he bought in 1959. Although he’s now 93 years old and no longer fishes, he will be happy as he recalls the days of his lost youth and relishes the finding of the long lost lure.