This article appeared once in the Brimley High School newspaper in the 1960s.  Columnist Ann Landers has said it originally appeared in the Stars & Stripes newspaper, a US Armed Forces publication.  Reprints have appeared in Dear Abby and many other syndicated columns.   Stew Consentino, a Viet Nam vet, simply notes it as “author unknown”.  The Hattiesburg American (June 14th, 1966) attributes the poem to Leland C. Scott, a member of the Bensenville, IL post of Veterans of Foreign Wars who published it in the June 1966 issue of VFW Magazine in commemoration of the 50th anniversary of Flag Day observance.  It was finally read into The Congressional Record in October 1966 at the behest of Ohio representative Frank T. Bow (with the VFW Magazine attribution)

Some people call me Old Glory, others call me the Stars and Stripes; also I have been referred to as the Star-Spangled Banner. But whatever they call me, I am your flag, or as I proudly state, the flag of the United States of America. There is something that has been bothering me, so I thought that I might talk it over with you. Because it is about you and me.

I remember some time ago, I think it was Memorial Day. People were lined up on both sides of the street to watch the parade. The town’s high school band was in back of me and naturally, I was leading the parade. When your daddy saw me coming along waving in the breeze, he immediately removed his hat and placed it against his left shoulder so that his hand was directly over his heart. Remember?

And you, I remember you. Standing there as straight as a soldier, you didn’t have any hat but you were giving the right salute. They taught you in school to place your hand over your heart. Remember little sister – not to be outdone, she was saluting the same as you. I was very proud as I came down your street. There were some soldiers home on leave and they were standing at attention giving the military salute. Ladies as well as men all paying me the reverence that I deserve.

Now I may sound as if I am a little conceited. Well, I am. I have a right to be. Because I represent the finest country in the world, the United States of America. More than one aggressive nation has tried to haul me down, but they all felt the fury of this freedom-loving country. You know, you had to go and defend me. And a mighty fine job you did, too.

What happened? I’m still the same old flag. Oh, I have a couple more stars added since you were a boy. A lot more blood has been shed since that Memorial day so long ago. Dad is gone now. The old home town has a new look. The last time I came down your street I saw some of the old Landmarks were gone, but in their place shining majestically in the sun were a number of new buildings, beautiful new homes, Yes Sir, the old town sure has changed.

But now I don’t feel as proud as I used to. When I come down your street, you just stand there with your hands in your pockets and give me a small glance and then look away.

When I think of all the places I have been, Anzio, Guadalcanal, Korea. Who knows where I’ll be next? Then I see the children running around and shouting. They don’t seem to know who I am. I saw one man take his hat off and then look around. He didn’t see anybody else with theirs off, so he quickly put his back on. 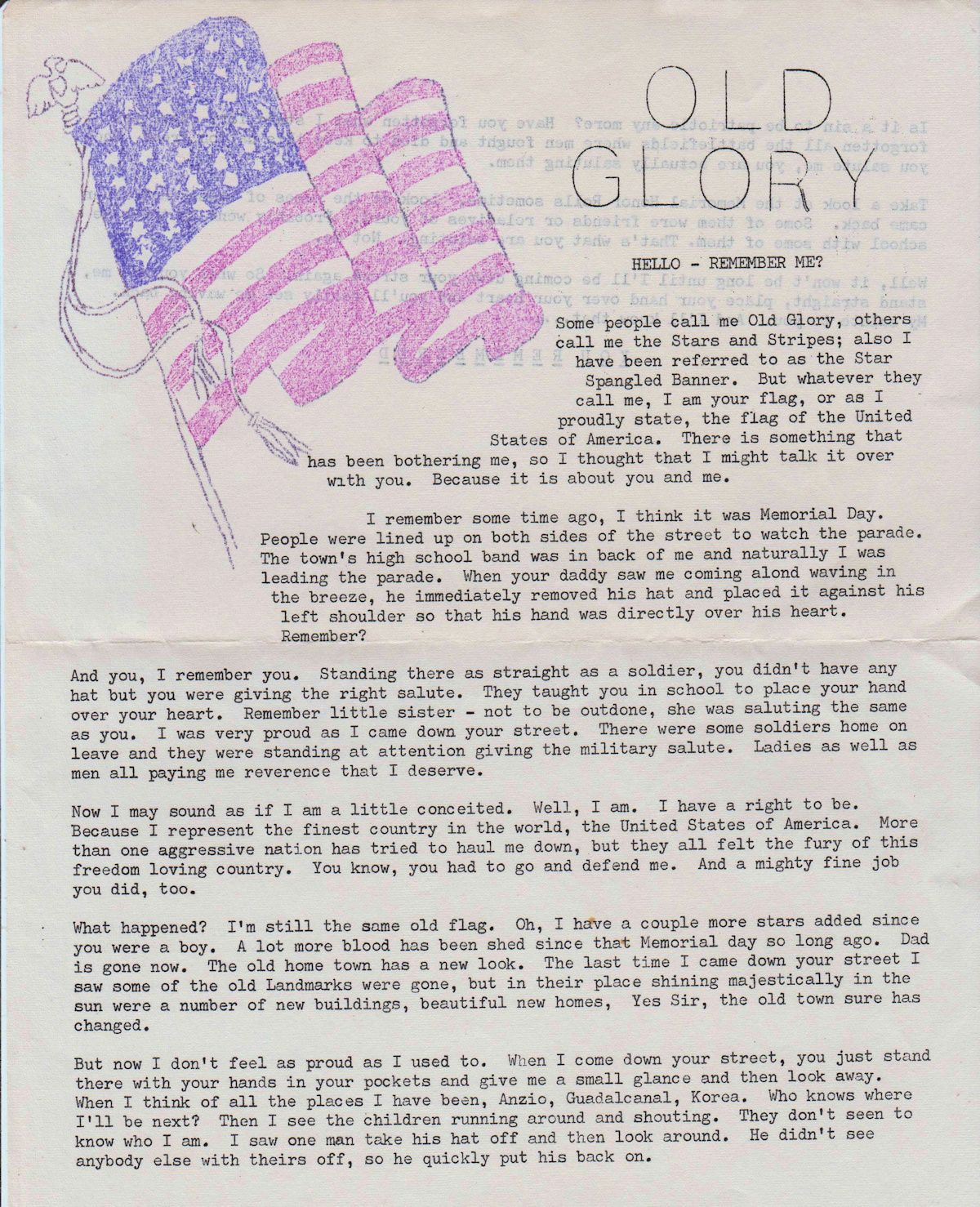