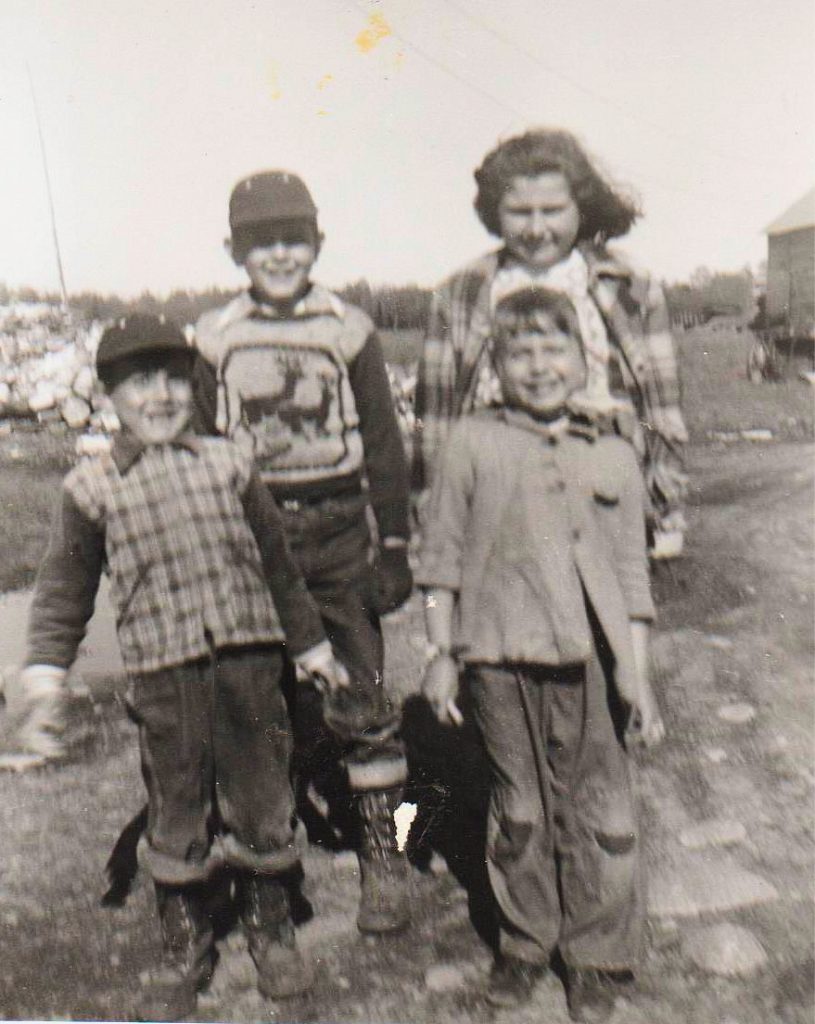 When we were kids in the 1950s, Mom made sure our overalls were patched, the buttons on our jackets were securely sewn in place, and bandanas protected our hair and ears. How my sister escaped wearing one is beyond me. In this photo, Jude’s shorty jacket isn’t even buttoned and Steven, our cousin one year younger than Jude, isn’t wearing a jacket. His brother, Jerry, who was a year my senior, dressed for the weather and so did I. As is plainly visible, we would not have won a “best dressed” contest. Today’s kids would be horrified if their mother made them wear anything close to our getups, but we didn’t know any different.

For you see, in the old days that’s how things were done. Good clothes were never worn anywhere except to school, church, or the occasional Friday night trip to Sault Ste. Marie. When we played outside, we thought nothing of wearing apparel that was ripped or patched or stained. If our overalls were much too long, we simply rolled them up. If jackets were too small and our arms were exposed to the autumn weather, we endured the cool air without complaint. After all, arms couldn’t catch cold or get an earache so it was no big deal. The whole idea of being outside was to have fun whether that meant playing in the haymow, checking an empty manger in the barn for a new litter of kittens, or getting out a bat and ball for a quick softball game. I don’t remember what it was called, but the batter only had to run to first base and back. There were two batters, one pitcher, and one fielder.

As our parents visited, we found ways to amuse ourselves. Staying in the house was unthinkable unless we were called in for lunch, then we ran back outside as soon as the last spoonful of chili was consumed and our glass of milk was empty. One memory of my Dafter cousins that stuck with me was their absolute reluctance to drink that lousy “cow’s milk” Mom kept in a quart jar in the fridge. Although they had other relatives who lived on farms, somehow the boys couldn’t make the connection between milk in a Mason jar and milk in one of Osborn Dairy’s fancy jugs. My memory doesn’t reach back far enough to recall whether they did drink the milk once Mom mixed a helping of Nestles Quick in the glass to camouflage the white stuff that came straight from Daisy’s udder.

Ah, the good old days when kids dressed in clothes that would be considered rags in the 21st century, played outside in all the seasons, and drank unpasteurized milk. Those days are gone forever, but us oldsters remember a time when life on the farm was all we knew. I can’t help but think we’re better off for it.