Home Reminiscences The Christmas Clock’s a Tickin’ in the U.P.

The Christmas Clock’s a Tickin’ in the U.P.

In 25 days, Christmas Eve will be here. You know perfectly well you don’t want to think about it because you haven’t started shopping. Chances are you even avoided all those wonderful Black Friday and Cyber Monday super sales. It’s just too early to think about Christmas. You dread the thought of going into stores and picking out presents, and like last year, you’ll wait as long as possible before doing the inevitable. We all know what that means: You’ll be forking over money you should be spending on groceries and your utility bills.

If your children are adults, they probably won’t expect more than a crisp $100 bill in a Christmas card. Unless they’re having a hard time financially, they might even settle for an empty card from mom or dad. However, it’s another matter when it comes to giving gifts to children. I suppose you feel obligated to spend the same amount on each child and this can be a problem. A present for Billy might cost double Bobby’s gift. Polly’s doll is $30 while Molly’s is $50. How do you solve this dilemma? Do you buy two presents for one child to equal the amount you spent on the other? This brings up another issue that further complicates things. Now Polly has two gifts and Molly has only one. Ditto for Bobby and Billy. Timmy, the baby, has a dozen presents and Jimmy the teenager unwraps an $800 phone and looks around for the other 11 gifts. You have a momentary twinge of guilt, but then you come to your senses. Regardless of their age, maybe next year each kid will receive a pair of socks, some underwear and a box of Dum-Dum suckers.

When did Christmas become a nightmare in the gift-giving department or has it always been one? Did my mother dread it? She had three children, a husband, nieces, nephews, siblings and in-laws. There was all that shopping to do, a tree to decorate, a house to clean, a turkey to roast, midnight mass to drag us to and her offspring begging to open one more gift on Christmas Eve. Were the holiday demands equivalent to Herculean tasks for her?

But undoubtedly the worst part of the season was Santa Claus. Every year Mom lied to us because that’s what every parent feels they must do to keep the myth alive. Everyone lies about a man in a red suit. Songs are written about him. Movies abound about a jolly, generous old fellow who magically appears on Christmas eve and eats the cookies left for him. The most famous Christmas message was penned by a loving father to his daughter. The New York Sun printed a letter to Virginia assuring her Santa was, indeed, alive and well and would live forever. Children are encouraged to write letters to him, and the post office goes along with the charade.

People who wouldn’t dream of telling a little white lie tell whoppers in December. By the 12th, the lies are so enormous even parents believe in Santa. “Believe” has become a symbol of the season. That one word means we’ve fooled ourselves into believing whatever comes out of our mouth no matter how ridiculous.

Today my gift list has dwindled to my daughter and brother. Santa is forgotten. I don’t bother with a tree or roast a turkey, but for those of you who do, you better hop to it. The clock’s a tickin’. 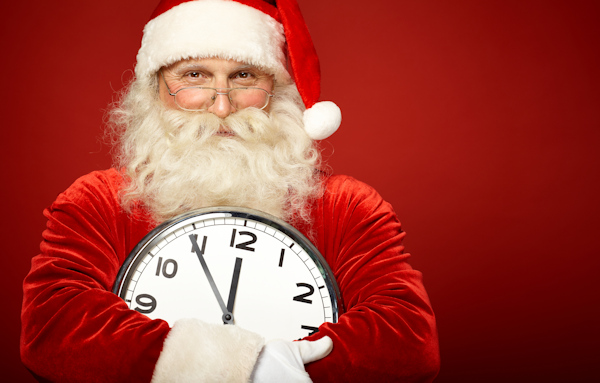