The SideRoad Kids are Excited 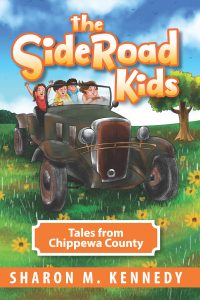 The SideRoad Kids are anxious to tell their side of the story penned by the author. Tonight at 7:00 p.m. they’ll get their chance. They’ve waited a long time to speak up, and they’re ready for their Zoom call this evening. Flint is almost jumping out of his skin. He wants to say that although he’s dirt poor as far as money goes, he’s wealthy in wisdom, at least he thinks so. He’s the oldest of the kids because he flunked kindergarten as readers of the book know. His pal, Squeaky, is clamoring for a voice to tell his story. He agrees he’s a little over weight, he’s shorter than his twin, Shirley, he talks a lot, and he knows he’ll never win Candy’s heart, but he’s persistent in trying. He says he’ll never give up on love.

Elizabeth wants readers to know she’s more than just a pretty face. As a newcomer to the sideroad, it took her awhile to adjust to her surroundings. She didn’t understand Shirley’s love of dolls, her tumble-down old house, or the way the girls dressed. They wore what they called “barn clothes” instead of frilly dresses and fancy footwear. Eventually she says she “got it.” Daisy explains that having a club foot was not her idea, but she’s come to realize her author gave her what readers might call a “disability” to show it’s really only a difference in physical appearance.

Blew, well-known as a liar, says he only exaggerates, and you can’t call that lying. He says sometimes a fellow has to embellish the truth the way Gramps does to keep a story interesting. Blew’s not sure what “embellish” means, but he thinks it has something to do with eating. He explains it like this: The more you eat, the bigger you get. A story is like that. The more you talk, the bigger the fish grows. He loves to fish so it’s only natural he would use a fish story as an example.

His best buddy, Johnny, says he still grieving the loss of his Ma and can’t understand why she ran away with the preacher from Kinross who wasn’t as good-looking as Johnny’s Pa. Pa says she left because she hated the pig farm. Johnny finds that hard to believe and wants readers to know he loves pigs. Yes, he agrees, they grunt, snort, and stink, but their bacon is delicious. Katie, the gal he’s crazy about, knows he’s sad and is helping him by keeping quiet and giving him time to heal. She wants her fans to know, that although she’s the smartest of the group, she’s not stuck-up. That’s why she made up the silly story about Robinson Crusoe. She knew perfectly well he wasn’t the son of John the Baptist.

Fenders wants readers to know he regrets killing Mr. Sims’ cat. He wishes the author hadn’t told anyone about the accident because he’s a poor shot and it makes him look bad. He maintains it wasn’t his fault. If the cat had stayed in the house, it would be alive today. He also wants folks to know he’s a really good driver.

The other kids want to tell their stories which might differ from the author’s. So join the Zoom session tonight and hear from Russell, Danny, and Larry. There’s a possibility Mr. Keller, the music teacher, might show up. Mr. Bartlett, who teaches geography, is demanding time and Mean Gene, the bus driver, wants his five minutes of fame. Hop on board and find out who the author includes in tonight’s story. She might give free rein to the characters she created, or she might muzzle them and do all the talking. Authors are like that, you know.